— There is at least one plausible Electoral College scenario that produces a 269-269 tie, which would throw the presidential election to the House of Representatives elected in 2020.

— If the House decides the presidency, you might think that Democrats would have the advantage, given their new majority. But it’s the Republicans that hold — and are likely to maintain — the advantage.

Why an Electoral College tie might go to the GOP

Such a situation is certainly not likely, but it’s not impossible either. As we look ahead to the 2020 presidential race, there is a plausible Electoral College map where neither side is able to get the 270 electoral votes needed for a majority. That dreaded 269-269 tie would look like this: 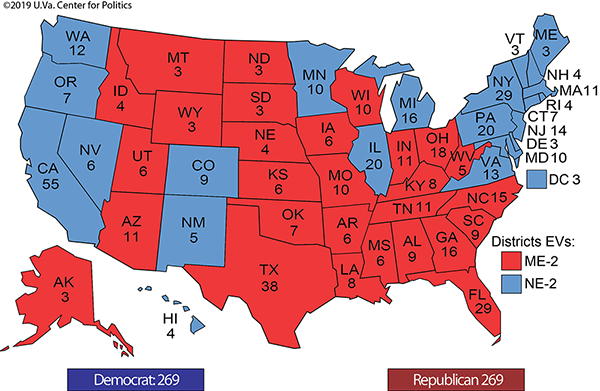 There are other tie scenarios. Those of you who want to come up with your own plans can check out 270ToWin.com or Taegan Goddard’s Electoral Vote Map.

Map 1 would be the 2016 Electoral College map with just three alterations. Michigan and Pennsylvania, which Donald Trump won by less than a percentage point apiece, would flip to the Democratic nominee. Additionally, Democrats would pick up the electoral vote in Nebraska’s Second Congressional district, which voted for Trump by about two points in 2016 and should be hotly contested in 2020. Crucially for Trump (or another GOP nominee), he holds onto all of his other electoral votes from 2016 in this scenario, including an electoral vote in Maine’s Second Congressional District that he carried comfortably by about 10 points in 2016. That deprives the Democrat of his or her decisive 270th electoral vote here. Remember that Maine and Nebraska are the only states that award electoral votes by congressional district. There’s also the possibility that a candidate could win exactly 270 electoral votes or just a few more only to see faithless electors fail to vote for them. Remember that seven electors in 2016 actually failed to vote for their designated candidate, although it’s one thing to cast a throwaway protest vote when it doesn’t really matter — it’s quite another to do so when the election is on the line (many states have laws against faithless electors but they often don’t have much teeth: FairVote has helpfully compiled them).

In any event, let’s set aside the concept of faithless electors and instead focus on how the president would be selected in the event of a tie or another situation where no one wins a majority of electoral votes. The House elected in 2020 would pick the president, but in a way that benefits the Republicans, at least as the House is currently composed.

Each state U.S. House delegation gets to cast a single vote for president. That means that California’s House delegation, with 53 members (and a whopping 46-7 Democratic advantage), has the same power in the process as Wyoming, with its single Republican member. (The Senate would select the vice president, with each of the 100 members getting a vote.)

The last time the House picked the president, 1824, the House passed over the candidate who won the most Electoral College and popular votes (though not a majority of either), Andrew Jackson, in favor of John Quincy Adams. When the House has to pick the president, it can only choose from amongst the three leading Electoral College vote recipients; in 1824, those were Jackson, Adams, and Treasury Secretary William Crawford. The fourth-place electoral vote recipient, House Speaker Henry Clay, was eliminated from consideration but backed Adams, who later named Clay secretary of state. Jackson and his supporters decried a “corrupt bargain” between Adams and Clay, a resentment that helped fuel Jackson’s clear-cut presidential victory over Adams four years later.

Four years ago (following the 2014 election), we found a clear GOP edge among the 50 state U.S. House delegations. Republicans controlled 33 of the 50 delegations after an election in which they won 247 House seats. Now, even though Democrats won a solid 235-199 House majority last November (with one district, NC-9, still unresolved), Republicans still control a majority of the House delegations, albeit a smaller one. Republicans control a majority of the seats in 26 House delegations, Democrats control 22, and two are split right down the middle. Those two split states just happen to be two of the most competitive states in the country, and the only two states that would flip from red to blue under the Electoral College tie scenario presented above: Michigan (7-7 tie) and Pennsylvania (9-9 tie). (Technically, the Pennsylvania delegation is now 9-8 Democratic with the resignation of Rep. Tom Marino (R, PA-12), but for the time being we’re going to assume that Republicans will hold the seat, which Trump carried by 36 points, in a special election that will be held later this year.)

Table 1 shows the makeup of the House delegation in each state, and Map 2 illustrates the data in Table 1 by state. 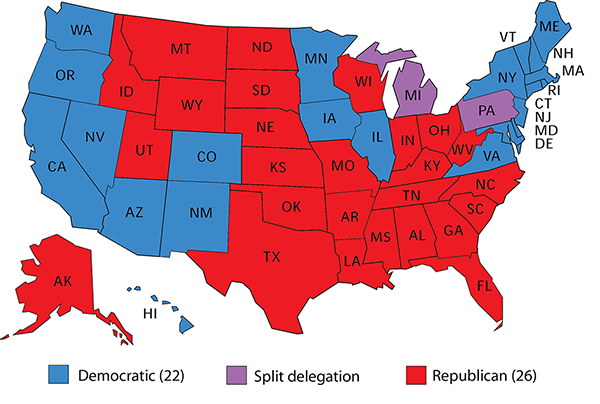 Notes: Table 1 is sorted from largest delegation (top) to smallest (bottom). *Assumes Republicans hold the now-vacant but very heavily Republican PA-12 in a special election later this year. **North Carolina has a House vacancy stemming from the disputed and unresolved race in NC-9.

One could argue that the GOP edge largely comes from the smallest states, as the GOP holds a 5-2 edge among the seven states that only have a single, at-large House member. However, that edge disappears if one looks instead at the dozen states that have either one or two House members. Delegation control is split 6-6 among those states. That said, the GOP definitely benefits from a broader small-state advantage. Its four-delegation national edge comes entirely from the bare majority of states, 26, that have six House members or less. Republicans hold a 15-11 advantage in these states; the 24 largest states, those that have seven House members or more, are split 11-11 apiece, not including the two tied states of Michigan and Pennsylvania.

Perhaps unsurprisingly, the vast majority of states have a House delegation controlled by the same party that state supported in the last presidential election. The lone states that do not are Arizona, an increasingly purplish state that voted for Trump by about 3.5 points in 2016 but where Democrats won a 5-4 edge in the state’s House delegation last fall, and Iowa, a swing state that voted decisively for Trump in 2016 (by about 9.5 points) but then elected two new Democratic House members in 2018, giving Democrats a 3-1 edge statewide. Both states also have redistricting methods that are among the most nonpartisan of any state, which helps explain their overall competitiveness at the House level. The ties in Michigan and Pennsylvania reflect their close presidential results in 2016, as does the narrow 14-13 Republican edge in Florida.

Remember, the new House, not the old House, would break an Electoral College tie following the 2020 election, and it’s possible that Democrats could eliminate the GOP House delegation edge by gaining a seat apiece in aforementioned Florida, Michigan, and Pennsylvania — our newly-released 2020 House ratings show that Democrats have plausible House takeover targets in each state. If they did, and they held on to all the delegations they already control, that would mean — gulp — each party would control exactly 25 of the 50 delegations. How would such a split House handle breaking the Electoral College tie? If only the Democratic and Republican nominees won electoral votes, meaning that one or the other won every single state (as seems very likely), could rogue electors band together to support a compromise candidate as the third competitor for election by the House?

Who knows? Such a situation would be unprecedented in modern times. Realistically, though, it’s hard to imagine the Democrats taking a majority of the House delegations in the next election unless the overall election was a Democratic runaway, in which case there wouldn’t be a tie in the Electoral College to worry about anyway.

On the other hand, the GOP may end up solidifying their majority control of the House delegations. Tied Michigan and Pennsylvania each could flip their way, as Republicans have viable targets in each state. Additionally, the GOP could force ties in states like Maine and New Hampshire just by retaking a single swing seat in each that the party has held recently, and Republicans also could plausibly retake control of the delegations in other states where the Democrats hold a tenuous edge, like Minnesota and Virginia as well as the aforementioned Arizona and Iowa.

There are plenty of hypotheticals here, and, to be clear, we aren’t likely to see a 269-269 tie. But if we did, the GOP remains likely to hold an advantage in such an extraordinary scenario.