— North Carolina’s open-seat race is clearly the marquee contest of 2024’s gubernatorial races. It starts as a Toss-up.

— The other contests start with clear favorites despite several open seats.

— If popular Republican incumbents run for another term, the GOP should be in great shape to hold New Hampshire and Vermont. But they would be great Democratic opportunities as open seats.

— Mississippi moves to Likely Republican following the entry of a credible Democratic candidate after our initial 2023 rating release last week. 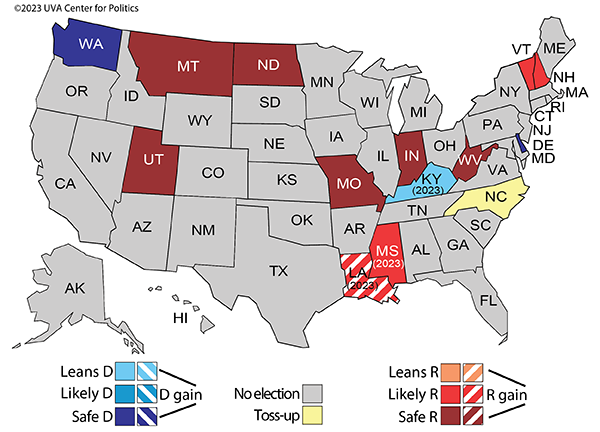 Following up on our initial 2023 gubernatorial ratings post from last week, we’ll look a bit further down the road with a survey of 2024’s races. Our home state, Virginia, will be at the center of the action — sort of. This year, the key contest will be our neighbor to the west, Kentucky. In 2024, our southern neighbor, North Carolina, will likely be the most hotly contested gubernatorial contest.

The 2022 cycle proved to be a banner year for incumbent governors: it was the first gubernatorial midterm since 2002 that saw all incumbent governors who ran secure renomination. The general election featured incumbents in 28 of the 36 states that held contests — all but one, Steve Sisolak, a Nevada Democrat, were reelected. Though there will be far fewer gubernatorial contests on the ballot in 2024, it will be a cycle defined by open seats, not incumbents. Five of its 11 contests feature term-limited incumbents and there is at least some chance several other incumbents may step aside.

We’ll start in North Carolina. As we’ve mentioned in past articles, despite the state’s persistently light red hue in federal races, Republicans have struggled in gubernatorial contests: by 2024, they will have held the Executive Mansion for just 4 of the last 32 years. Current Gov. Roy Cooper (D-NC) got to office in 2016 by defeating then-Gov. Pat McCrory (R), who was left holding the bag for some of his conservative legislature’s actions. Cooper, then the sitting state Attorney General, ran about 4 percentage points ahead of Hillary Clinton’s margin in 2016, just enough to get him past McCrory. Cooper won by 4.5 points in 2020, or close to 6 points ahead of Joe Biden’s showing.

As Cooper, who is now term-limited, was outperforming his party’s presidential nominees, so was his protégé, Josh Stein. Before spending several years in the state Senate representing Wake County (Raleigh), Stein served as an assistant Attorney General under Cooper. In 2016, he succeeded his former boss, winning by half a point. In 2020, Stein posted another similarly close margin. Stein got into the gubernatorial race yesterday, although his ambitions for the office have been an open secret in state politics for some time. Stein’s template may be similar to another Democratic Josh who was just elevated from Attorney General to Governor: Pennsylvania’s Josh Shapiro. Like Stein, Shapiro compiled a winning electoral record in his own right, but was helped by a controversial opponent. In North Carolina, Republicans also seem likely to produce such a candidate.

In 2020, even with Cooper atop of the ticket, North Carolina Democrats were disappointed in the race for the state’s second-highest job. Mark Robinson, a first-time candidate, won the open race for lieutenant governor with close to 52%, getting more raw votes than Donald Trump. Robinson, a Black Republican, got involved in politics as a gun rights advocate. Despite a trail of problematic comments, Robinson has established a strong rapport with Republican primary voters — a December poll from the Differentiators (a GOP firm) found him polling at 60% in a hypothetical primary scenario. Other Republicans whose names have come up include Sen. Thom Tillis (R-NC) and state Treasurer Dale Folwell, both of whom would be “safer” choices than Robinson but may also be harder sells to a GOP primary electorate. At this point, Stein against Robinson clearly seems the likeliest general election scenario — tellingly, in his announcement video, Stein singled out Robinson.

Is it possible Robinson becomes the next Doug Mastriano? Yes. Still, North Carolina is a tougher state for Democrats than Pennsylvania — at this point, we’d probably pick Biden to lose the former in 2024 while he’d have a good shot at the latter. Though Robinson was running for a lower-profile office in 2020, and likely got less scrutiny than he would have as a candidate for governor, some of his more divisive statements were already public. We are starting North Carolina off as a Toss-up.

Aside from North Carolina, the 2 other Democratic-held gubernatorial seats up next year will be Delaware and Washington state. Both are Safe Democratic.

In the president’s home state, Gov. John Carney (D-DE) is term-limited — before running for the job in 2016, he served 3 terms in the House. There are several Democrats who could easily lock down the seat.

Gov. Jay Inslee (D-WA), who is in his third term as the Evergreen State’s top executive, is not term-limited. Inslee got some national attention as a 2020 presidential candidate; in a crowded field, he emphasized climate change and environmental sustainability. Since his initial election, in 2012, Inslee has won by increasing margins: going from 3% to 9% to 13%. Though his approval ratings are not especially high — an October SurveyUSA poll had his approval spread on slightly negative ground — Washington is a state that the Democratic presidential nominee is expected to carry by double-digits. Inslee has been fundraising like a candidate who is seeking reelection, but if he doesn’t, Democrats should not have trouble finding a candidate. Though depending on the strength and number of candidates, Washington’s blanket primary system could produce an intraparty general election.

This past cycle, Oregon’s long history of electing Democratic governors — and whether Republicans could break that streak — got a lot of attention in what was a competitive race. Democrats ultimately won that election, meaning that Republicans have not won a gubernatorial race in Oregon since 1982. Washington’s streak of electing Democrats goes back slightly further — Republicans have not won the governorship since 1980, although they did come within about 130 votes of winning the achingly close 2004 race. We’ll see if Republicans can make this a contest during this cycle; as of now, it seems like a solid Democratic hold in a presidential year.

Republicans currently hold a pair of governorships in states that Biden carried in 2020 and is expected to again. Govs. Chris Sununu (R-NH) and Phil Scott (R-VT) are each on their fourth 2-year term in office, and both are eligible to run again. Even as Democrats overperformed in 2022’s gubernatorial contests nationally, both won easily. Scott won by nearly 50 points last year, and while Sununu’s showing was down markedly from his 2020 result, he still took a commanding 57%. For now, our Likely Republican rating in these states is acting as somewhat of a placeholder: if either, or both, run again, they will be favored, but open seats would probably start off as at least Toss-ups.

Both New England governors have been critical of Trump — not surprising, given their states — but if Sununu forgoes reelection, it may be to run for president himself. Scott, the more liberal of the pair, does not seem to have presidential ambitions.

Moving to Trump-won states, Republican governors will be term-limited in a trio of reddening states. In West Virginia, a crowded GOP field is already forming to replace Gov. Jim Justice, a Republican-turned-Democrat-turned-Republican. Justice is considering a run for Senate. In Indiana, Republican Sen. Mike Braun will try to take the opposite trek, as a senator running for governor. Finally, Republican Gov. Mike Parson’s departure may generate a competitive GOP field, and Lt. Gov. Mike Kehoe is already running for a promotion.

In 2012 and 2016, Democrats were winning, or were at least competitive, in gubernatorial races in Indiana, Missouri, and West Virginia. In 2020, Republicans won each by double-digits. All start this cycle as Safe Republican.

North Dakota, which has not elected a Democratic governor since 1988, passed a state constitutional amendment last year limiting its governors to 2 terms. Importantly, the amendment, which goes into force this year, is not retroactive. In other words, previous service will not be counted. Though Gov. Doug Burgum (R-ND), who is already on his second term, endorsed the amendment, he seems to be gearing up to run for a third term. Former Gov. Jerry Brown (D-CA) benefitted from a similar legal quirk in his state. Brown was elected governor in 1974 and 1978, but opted to run for Senate in 1982. After the state passed a measure limiting the governor to 2 terms in 1990, he came back in the 2010 elections to serve another pair of terms (he is now ineligible to be governor).

Finally, Montana and Utah both feature incumbents who are apparently running for reelection and are Safe Republican. Of those, Montana seems likelier to eventually end up on the board. If Sen. Jon Tester (D-MT) runs for reelection, his effort may boost the Democratic nominee. Montana, though a red state in presidential politics, also has more of an openness to Democratic governors — if current Gov. Greg Gianforte is reelected, it will be the first time since 1996 that Montana has given a GOP governor a second term. Gianforte also could hypothetically run for Senate, which would open up the governorship.

P.S. A change in Mississippi

Last week, when issuing our initial 2023 ratings, we put Mississippi’s contest in the Safe Republican category, but added that if Democrats could produce a quality candidate by the state’s Feb. 1 filing deadline, we’d reconsider. Well, we didn’t have to wait until February, as Mississippi Democrats immediately made us follow through on our promise. Public Service Commissioner Brandon Presley got into the race Thursday morning. A populist Democrat who cites Franklin Roosevelt as a role model, Presley is probably the party’s best possible recruit. However, Mississippi is still a very Republican state, and having a strong nominee in 2019 — then-state Attorney General Jim Hood (D) — was not enough to allow Democrats to win back the governorship then.

There was also a bit of good news for incumbent Gov. Tate Reeves (R-MS) last Thursday, too. A national gubernatorial poll from Morning Consult found his approval spread on positive ground, at 49%/41% — while he is under 50%, those numbers were effectively a reversal of his spread in the same group’s October 2022 poll. But the bottom line from last week’s developments in Mississippi is that, with a credible candidate in Presley and the possibility that Reeves could get pushed in his own primary, we are moving the race to Likely Republican.