— Joe Biden’s approval rating has been steady and positive, though many other presidents had better early numbers.

— The “honeymoons” of past presidents may have been stronger because of a less partisanized and polarized electorate.

— Some pollsters who were overly bullish on Biden in the national popular vote last year are a little bearish on him now.

The term “Hundred Days,” used to denote the opening few months of a new presidency, entered the American political lexicon with the presidency of Franklin Delano Roosevelt. With the help of large congressional Democratic majorities and the impetus of the Great Depression, FDR’s whirlwind Hundred Days “forged Roosevelt’s principal weapons in the battle against the Depression and shaped much of the New Deal’s historical reputation,” wrote David Kennedy in Freedom from Fear: The American People in Depression and War, 1929-1945.

The term has an older, historical significance: It describes Napoleon’s brief return to France in 1815 following his initial exile to Elba, culminating in his final defeat at Waterloo.

In any event, the Hundred Days’ mark has become a popular time to take the measure of a new president. We’re a little early — as we’re writing this on Wednesday afternoon, April 21, Biden is at his 92nd day in office — but we thought this would be a good time to check in on how the public views Biden so far and how he compares to past presidents.

Table 1 shows the post-World War II presidents and their approval rating in FiveThirtyEight’s historical tracking on the 92nd day of their presidencies. This starts with Harry Truman, who took over for FDR in the closing months of the war. 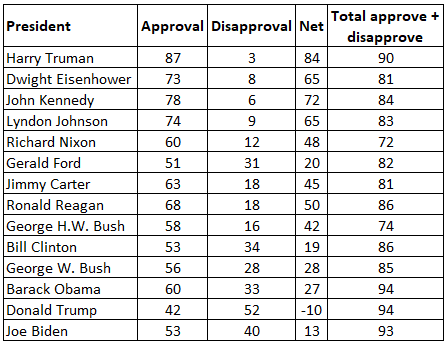 Note: “Total” column slightly differs in some instances from sum of “Approval” and “Disapproval” columns because of rounding.

Biden, at a 53% approval and 40% disapproval split in the overall FiveThirtyEight average, is doing well compared to his predecessor, Donald Trump, but he lags every other president in terms of net approval in the opening period of his presidency. What this table seems to illustrate is the hardening partisanship of the American electorate — note the column on the right, the percentage of people expressing an opinion. The number has been over 90% at this point for the last three presidencies (including Biden’s) — a sign that, perhaps, people who didn’t vote for the new president are less likely to give a new president the benefit of the doubt, opting to just say they “disapprove” of his performance as opposed to saying they neither approve nor disapprove.

We are also in an era of steady presidential approval, which is another sign of hardening partisanship. The last two presidents, Barack Obama and Donald Trump, saw their average approval hover in a fairly narrow band: Obama was often in the mid-to-high 40s, and Trump was often in the low-to-mid 40s. The venerable pollster Gallup pegged Obama’s average approval rating throughout his eight years in office at 48%, and it had Trump at 41% in his four years. Our former Crystal Ball colleague Geoffrey Skelley, now writing for FiveThirtyEight, found in April 2020 that Trump’s approval rating was the steadiest of any of the postwar presidents, and Obama’s was second-steadiest. It may be that, in this era, presidents have both a hard ceiling and hard floor in approval — just like they may have at the ballot box. The last president to win the national popular vote by double digits was Ronald Reagan in 1984.

Probably the fairest evaluation of Biden’s approval rating so far is that he is off to a decent start, considering the strong partisanship of this era. But he may also still be experiencing something of a honeymoon, as is common with new presidents (albeit less pronounced in a more partisan era). Indeed, Biden’s disapproval rating has crept up a little over the course of his first few months in office — he started at 36% in the average, and he’s now at 40%, even as his approval has remained consistently in the 53%-54% range.

The average, though, masks the rather substantial disagreements among individual pollsters on Biden’s approval rating. Table 2 shows recent national Biden approval polling from several prominent, national pollsters that also released national polls testing Biden versus Trump near or at the end of the 2020 presidential campaign.

On average, these eight pollsters reflect the current FiveThirtyEight average exactly: 53% approve, 40% disapprove. But there are notable differences among these pollsters, as Biden’s net approval in these polls ranges from two points to 22 points.

Rasmussen Reports, which generally was the most bullish pollster on Donald Trump’s approval rating during his time in office, is most bearish here on Biden, showing essentially an even split between approval and disapproval (they are also the only pollster that always looks at “likely voters,” a smaller universe of potential respondents than registered voters or all adults). Meanwhile, HarrisX has Biden at a much stronger 61%-39% spread. Both of these polls, despite the different findings, have no or almost no undecideds on Biden’s performance.

Meanwhile, Morning Consult is also bullish on Biden compared to the average, while Ipsos and YouGov are relatively close to the average. IBD/TIPP is at the average on approval, but shows a smaller Biden disapproval and thus more undecideds. Quinnipiac University and CNBC — the latter of which is jointly conducted by respected Democratic pollster Hart Research Associates and Republican pollster Public Opinion Strategies — are relatively bearish on Biden compared to the net average, though not dramatically so.

Still, this has set up an interesting dynamic. Note the final column in Table 2, which shows the lead that all of these pollsters had for Joe Biden in their final national polls of 2020. The leads ranged from just one for Rasmussen to 11 for CNBC and Quinnipiac. Biden’s actual winning margin was 4.5 percentage points, so it was much more common for these polls (and others not listed here) to overshoot Biden’s lead, though HarrisX and IBD/TIPP were right on the money.

Dan Guild, a poll-watcher and previous Crystal Ball contributor, tweeted last week that he was noticing that some of the pollsters who had overestimated Biden’s winning margin in 2020 are now finding relatively weaker Biden approval now. His tweet prompted us to check it out, and we noticed that CNBC and Quinnipiac both had Biden up by 11 in 2020, but now have Biden’s net approval rating worse than the average.

We don’t know if there is anything to be gleaned from this at such an early point in the Biden presidency. We’re also comparing apples to oranges to some degrees — final 2020 polls generally were of likely voters, whereas these two pollsters are just polling all adults now, many of whom won’t vote in a midterm (the 2018 midterm had a very strong turnout, but that was still just about 50% of eligible voters). Most pollsters won’t start trying to figure out who likely voters are until the summer or fall of next year.

However, it is interesting that while Biden’s overall average approval rating has been steady, pollsters disagree about how strong it actually is.

Biden’s actual level of popularity matters greatly for the 2022 midterm. If his approval rating eventually turns negative, the Democrats will be hard-pressed to hold their narrow edges in the Senate and especially the House. If Biden’s approval stays positive, Democrats might have a chance to buck the usual midterm penalty that is often inflicted on the presidential party. But the degree to which Biden is popular or unpopular likely matters too. We’ll see if individual pollsters come more into alignment on this as time goes on.