— The reelection victories of three long-serving senators illustrate some of the nation’s political shifts.

— Despite a well-funded Democratic challenge, Sen. Lindsey Graham (R-SC) held on in large part because of the lack of ticket splitting in his red state.

— As of this election, Senate Majority Leader Mitch McConnell (R-KY) has now carried every county in Kentucky in a general election at some point in his career.

— Sen. Dick Durbin (D-IL) was solidly reelected in his blue state last month, but he’s traded much of his Downstate support for votes in Chicagoland.

In some ways, senatorial elections, especially in presidential years, are becoming increasingly boring. Sure, this past senatorial cycle saw record-shattering amounts of money spent and featured a colorful cast of candidates, but at the end of the day, the elections were defined, mostly, by partisan loyalty.

In 2016, all 34 states that had Senate races voted the exact same way for both their presidential and senatorial contests. With the exception of Sen. Susan Collins (R-ME), that was the case in 2020, as well — though Sens. David Perdue (R-GA) and Kelly Loeffler (R-GA) may end up prevailing in their runoffs in a state that Joe Biden narrowly carried.

Still, the 2020 races featured some longtime incumbents who have seen major changes in their electoral coalitions over the years. As we start to sift through the results, South Carolina, Kentucky, and Illinois stand out as states that are especially notable.

While the Crystal Ball didn’t see the South Carolina Senate race as competitive early in the cycle, as the campaign got underway, it appeared that former state Democratic Party chairman Jaime Harrison was picking up steam in his effort to deny Sen. Lindsey Graham (R-SC) a fourth term.

After a preponderance of polling earlier this year suggesting that Graham was running behind President Trump, Quinnipiac University showed the Senate race tied at 48% in late September. Tellingly, Trump was taking that same vote share, and leading Biden 48%-47%.

To political observers, there was little doubt that Trump would end up carrying the Palmetto State, though most polling pointed to a single-digit race. Still, it must have been reassuring to the Graham campaign that they were running even with the president — and that’s almost exactly how the race ended up.

Trump took 55.1% in South Carolina, and Graham finished only slightly behind, at 54.4%. So for all of the seeming drama in the race, Graham’s margin ended up being 10.3 points, only a little bit worse than Trump’s 11.7-point win. Drilling down to the precinct level it’s apparent why: very few Trump voters split their tickets (Map 1). 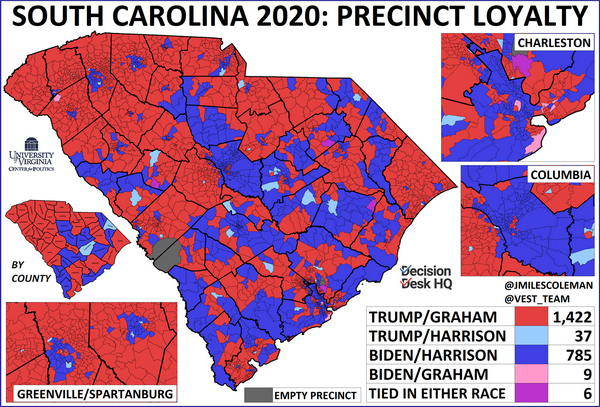 Of the roughly 2,260 precincts in the state, only 46 crossed over between the parties: 37 precincts that voted for Trump went for Harrison in the Senate race, and and nine Biden precincts did so for Graham. Another six precincts were tied in either race. So overall, almost 98% of the state’s precincts were loyal to one party for both races.

This election marked the first time in Graham’s career where he lost one of the state’s most populous counties, Charleston. A relatively large county with a Democratic base (it’s roughly 30% Black), it’s impressive, in retrospect, that Graham carried it in some recent elections. In 2014, he had the luxury of running in an overwhelmingly Republican midterm, but in 2008, a much more Democratic year, he demonstrated considerable crossover appeal there: as then-candidate Barack Obama carried it by eight percentage points, Graham did so 52%-47%.

Of the nine Biden/Graham precincts, six were in Charleston County, suggesting that, despite tying himself closely to Trump over the last few years, Graham retained a modicum of crossover appeal in the area. Specifically, the Mt. Pleasant neighborhood, a 90% white town that hugs the coast, came in especially well for Graham, as four Biden precincts in the area split their tickets for him. As we highlighted in an article right after the election, going one state north, Sen. Thom Tillis (R-NC) benefitted from a similar dynamic in the southern Charlotte area.

Across the South, Biden seemed relatively weak in the Black Belt, a region arching from east Texas up to Southside Virginia. Though the region derives its name from the soil, counties in this rural stretch tend to have high Black populations. Most of the Trump/Harrison crossover precincts tended to be in this area. In fact, the only two counties that voted differently between the presidential and Senate contests are located there: Clarendon and Dillon, which both are about half Black by composition. Earlier in his career, Harrison worked for House Democratic Whip Jim Clyburn (D, SC-6), whose district encompasses much of the state’s section of the Black Belt. So perhaps Harrison’s familiarity with the area and his association with Clyburn ended up paying electoral dividends there.

In the closing weeks of the campaign, the Harrison campaign tried, in a sometimes not-so covert fashion, to prop up the third candidate in his race, Constitution Party nominee Bill Bledsoe. Though Bledsoe dropped out a month before the election and endorsed Graham, his name was still set to appear on the ballot. The thinking by Democrats was that if they could siphon off some of Graham’s support, it would be easier for Harrison to squeak by with a plurality. In Harrison’s defense, the concept behind this strategy had some basis in electoral realities. In his past races, Graham routinely underperformed in Upstate SC — home to the evangelical Bob Jones University, the area has a sizable social conservative bloc, and Graham has sometimes taken positions that have alienated some very conservative voters.

But last month, support for Bledsoe hardly materialized. He took just 1.3% of the vote and didn’t run especially well Upstate. It was further evidence that Trump voters generally stayed loyal to Graham.

Though Graham’s high position on Democrats’ target list was fairly novel for 2020, another red state senator that Democrats always seem to target — and come up short against — is Senate Majority Leader Mitch McConnell (R-KY). McConnell was easily reelected against Marine veteran Amy McGrath (D). Though he ran a bit worse than Trump in the state, winning by about 20 percentage points instead of 26, the result was one of the widest margins of his career.

Going into the election, McGrath’s campaign raised nearly $90 million, but only ended up carrying three of the commonwealth’s 120 counties: Jefferson (Louisville), Fayette (Lexington), and Franklin (Frankfort). That type of geographic strength enabled McConnell to reach something of an electoral milestone: as of 2020, he’s carried every county in a general election at some point in his career (Map 2). 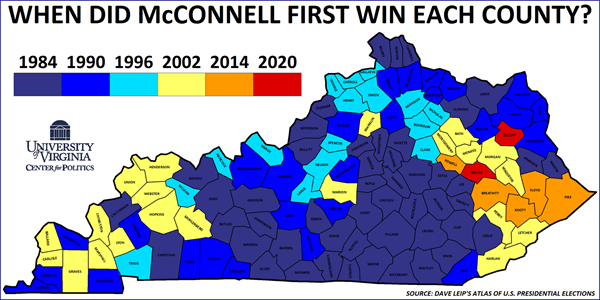 When he first won in 1984, McConnell was seen as a fresh, if ambitious, face with a reformist image, in part from his time as Jefferson County’s top executive. He carried the counties in the darkest shade of blue on Map 2 that year. In addition to the counties in the south-central part of the state — a swath that includes parts of the state’s Cumberland and Pennyroyal plateaus that has, politically, been supportive of Abraham Lincoln’s party since the Civil War — he carried both Jefferson and Fayette counties. That he lost both of those urban counties by double-digits in 2020 speaks to the change the state has seen since. In fact, when McConnell won in 1984, he was the first Republican to win statewide (excluding presidential races) since 1968; Republicans currently hold everything but the governorship in the state.

In the 1990s, McConnell began to make real inroads into areas that had previously been hostile to Republicans. In Kentucky, both the eastern and western extremes of the state were known for their ancestrally Democratic tendencies; the agrarian west because of its culturally southern orientation, and the mining-heavy east has had a strong history with organized labor since the days of the New Deal, though some western counties are also home to coal mines. In his two reelection efforts that decade, McConnell faced races that were at least somewhat competitive, and he flipped the counties in lighter shades of blue. In 1996, he beat back future Gov. Steve Beshear (D-KY) by 13%, even as Bill Clinton narrowly claimed Kentucky’s electoral votes. Speaking at the state’s annual Fancy Farm event years later, McConnell joked that his 1996 race was called so quickly the he had time to catch a movie afterward.

Perhaps because of the 1996 result, Democrats largely punted on the race in 2002. McConnell was reelected 65%-35%, his most robust margin ever. He picked up the counties in yellow — this was the first year that he swept all the counties that make up the Jackson Purchase, and he continued to gain out east.

2008 was arguably the last truly competitive race of McConnell’s career; in an unfavorable environment, he won 53%-47% but didn’t flip any new counties (why Map 2 doesn’t have a color to represent that year). Still, under Obama’s presidency, Appalachia started to become what is increasingly amounting to an electoral dead zone for Democrats — this for a number of reasons, including the the party’s perceived hostility to the coal industry. In 2014, against a heralded challenger in then-Kentucky Secretary of State Alison Lundergan Grimes (D), McConnell flipped the orange counties on Map 2, and by wide margins. Knott County, near the Virginia border, supported every Democratic presidential candidate from 1884 to 2004. It gave McConnell just 38% in 2008 but voted for him 59%-38% against Grimes, a sign that presidential trends were seeping down the ballot.

Going into 2020, the only holdouts left were Elliott and Wolfe counties — they ended up buckling, and are the two red counties on Map 2. The former is known for its historic loyalty to the Democratic Party. Even in 2016, as Trump’s presence atop the ticket generated a GOP riptide that swept through much of the state, voters in Elliott County seemed willing to split their tickets — as Trump took 70% there in 2016, breaking the county’s longstanding streak of supporting Democrats for president, Sen. Rand Paul (R-KY) lost it by 12%. But this year, Trump carried the small county 3:1, and McConnell and McConnell took two-thirds of its vote.

One state over, Sen. Dick Durbin (D-IL) is another senator who has seen lasting changes in his electoral coalitions over the years. While Illinois hasn’t certified its votes yet, the pattern is clear.

Durbin was first elected to the House in 1982, representing a Downstate district in between the Springfield and St. Louis areas. When another fellow Downstate Democrat, then-Sen. Paul Simon, retired from the Senate in 1996, Durbin ran for the seat, and he carried most counties south of St. Louis. As those demographically whiter and more rural counties have drifted Republican in past decades, Durbin’s coalition has increasingly become more urban and suburban (Map 3). 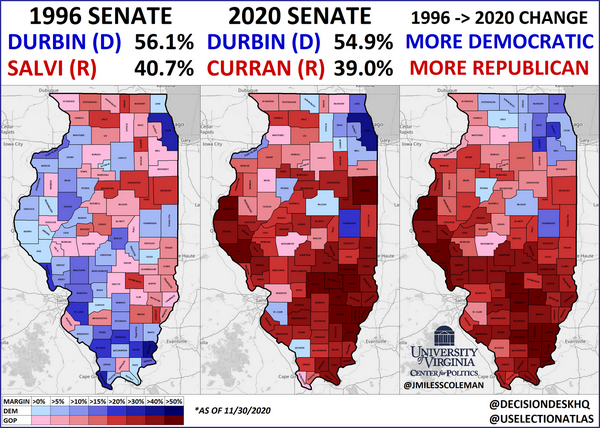 This year, other than narrowly losing McHenry County, he carried every county that touches Chicago’s Cook; these formerly-Republican suburban counties are known collectively as the Chicago’s Collar Counties. In 1996, he lost the largest collar county, DuPage, by 10 percentage points — last month, Durbin got the same 55% there as he did statewide.

Durbin held a smattering of Downstate counties, but this seems like more a sign of his strength with white collar academics than blue collar workers — aside from St. Clair County in the St. Louis metro area, with its large Black population, every county south of Peoria that he won last month is home to a major university: Champaign (University of Illinois), McLean (Illinois State University) and Jackson (Southern Illinois University).

To be fair, Durbin did perform relatively well, compared to Biden, in the counties that made up his old congressional district. In rural counties such as Brown, Calhoun, and Macoupin, he ran double-digits ahead of the national ticket — but often, it was a case of Durbin polling in the 30s, compared to Biden, who was in the 20s.

Throughout their careers, Durbin, Graham, and McConnell have won a number of impressive victories, including in this past election. But their bases of support are hardly immune to the overarching political changes that have taken place over their careers.