— This shows up in this year’s polling, as the margins for states’ presidential and Senate races are closely linked.

— An analysis of these polling data suggest that Democrats are likely to achieve a net gain of between one and eight seats with the most likely result a net gain of five seats, enough to give them a small Senate majority.

Over the past three decades, U.S. Senate elections have become increasingly nationalized. Presidential coattails have always been a factor in Senate elections, but the connection between presidential and Senate elections is much closer now than in the past. This trend reflects rising partisan polarization and straight-ticket voting. Thus, in 2016, for the first time in modern history, the candidate of the winning presidential candidate in the state won every Senate contest.

There is every reason to expect that the 2020 Senate elections will continue this trend. The overwhelming majority of voters have strong opinions about President Trump, and Republican and Democratic Senate candidates are generally emphasizing their support or opposition to the president and his policies in their campaigns. We expect to find a very close connection between the 2020 presidential and Senate elections, and we expect this connection to become stronger over time. Therefore, it should be possible to use polling data on the presidential contest to predict the outcome of the U.S. Senate election even in states for which little or no polling data is available on the Senate contest. 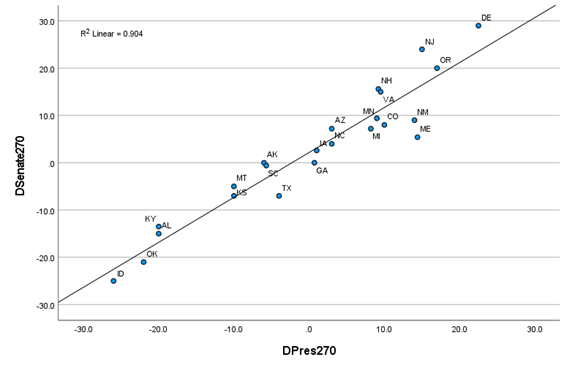 Along with the results of the presidential election, one other factor is likely to have a significant impact on the results of Senate elections — the advantage of incumbency. Incumbents typically are able to gain some support beyond their party’s voter base by providing constituency service and claiming credit for bringing federal projects and dollars into their state. However, this advantage has been shrinking in recent years because of rising partisan polarization and straight ticket voting.

Table 1 displays the results of a regression analysis of the average Democratic margin in the Senate contest on the average Democratic margin in the presidential contest and a variable measuring the incumbency status of the Senate contest. This variable is coded as +1 for contests with Democratic incumbents, 0 for contests with no incumbent, and -1 for contests with a Republican incumbent. The results in Table 1 show that presidential margin is a powerful predictor of the Senate margin. In addition, there is a significant but modest incumbency advantage. On average, incumbents added almost three points of margin to their party’s predicted vote. 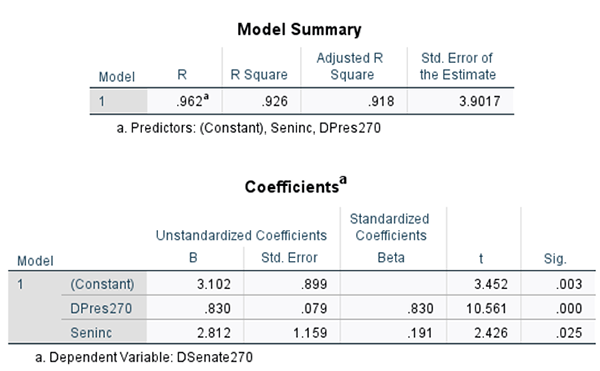 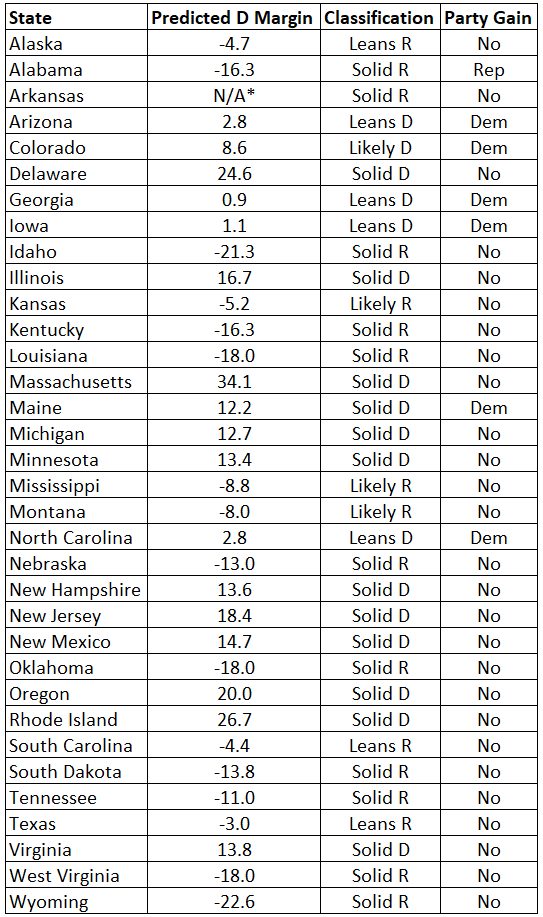 Notes: Georgia’s regular Senate election could go to a runoff in January if neither major party candidate wins an outright majority in November. The Georgia Senate special election is omitted because of the near-certainty of a post-election runoff: All candidates are running together in an all-party primary on Election Day, and no single candidate is likely to get over 50%. *Sen. Tom Cotton (R-AR) does not have a Democratic opponent, so no margin is listed for his race.

At this point however, only two of the predicted Democratic pickups appear to be very likely. If Democratic gains are limited to those two seats, they would end up with a net gain of only one seat and a total of 48 seats in the Senate. In addition, the Georgia regular Senate contest, currently classified as leaning Democratic, could go to a runoff in January if neither major party candidate wins an outright majority in November.

On the other hand, three additional Republican seats appear to be potentially vulnerable. Republican candidates are only slightly favored in Alaska, South Carolina, and Texas. If Democrats win all of these contests, along with the ones in which they are favored, they would end up with a net gain of eight seats and a total of 55 seats in the Senate. Thus, the likely seat swing range appears to be somewhere between a net Democratic pickup of one seat and a net Democratic pickup of eight seats, with the number of Democratic seats in the new Senate somewhere between 48 and 55.

There is now a very strong relationship between the outcomes of presidential and Senate elections. We can therefore predict the results of the 2020 Senate elections based on recent presidential polling in the states. My analysis of this polling data indicates that Democrats are likely to achieve a net gain of between one and eight seats with the most likely result a net gain of five seats, which would give them a 52-48 seat majority.