The 1974 midterm elections represented a perfect storm for Democrats. Not only had President Richard Nixon resigned in disgrace just a few months before November, but Nixon’s successor — Gerald Ford — compounded Republican political problems by pardoning his old boss. The economy was also poor in 1974: Gross domestic product growth was a weak -3.5%, 1% and -3.9% in the year’s first three quarters. Put it together, and it’s no shock that Republicans got smoked: The GOP lost 48 net House seats, four Senate seats and five governorships.

But amidst the Republican wreckage was a curious result: Ohio, known then and now as a reliable barometer of the nation’s political mood, went against the grain and chose a GOP governor over an incumbent Democrat.

Ohio Gov. John Gilligan (D) probably would have been a presidential contender in 1976 if he had picked up an extra 11,500 votes against James A. Rhodes (R), a former two-term governor who, after defeating Gilligan, would go on to serve another two terms. Rhodes’ 16 years in office made him one of the longest-serving governors in U.S. history (he unsuccessfully tried for a fifth, non-consecutive term in 1986).

What explains the upset? Factors that had little to do with the prevailing political climate.

As a generally well-regarded former governor, Rhodes was not a typical challenger to an incumbent. Beyond that, there were chinks in Gilligan’s armor. The Democrat didn’t have a first-rate political operation, and it showed in 1974. Gilligan’s reelection loss can be attributed largely to a poor showing in Democratic Cuyahoga County (Cleveland), where turnout dropped significantly from the previous gubernatorial race and where an aggressive television ad campaign by Rhodes pushed down Gilligan’s margin. Gilligan’s signature policy achievement was the creation of Ohio’s first income tax in order to fund expanded state services, but that of course opened him up to anti-tax criticism from Rhodes. Gilligan’s perceived arrogance didn’t help, nor did a Socialist Workers Party candidate, Nancy Brown Lazar, who won close to 100,000 votes. Those votes very well could have come out of Gilligan’s column, and she probably got them primarily because of her name, Brown, which is a golden surname in Ohio elections. Put it all together, and Gilligan “blew it,” to use his own words. Gilligan’s loss is particularly notable because other Democrats running in Ohio that year did quite well: John Glenn won his first term in the Senate, and Democrats won all but one of the other statewide executive offices.

Strange results that cut against otherwise dominant political trends can and do happen in every kind of race, but gubernatorial races, in particular, can be dictated by local factors, and these can be hard for national observers to fully comprehend.

That’s not to say that the national mood can’t play a role in state races. For example, there’s no real comparison to Gilligan in the three most recent midterm wave years: 1994, 2006 and 2010. Along with the House and Senate, Republicans netted 10 governorships in 1994, but only four of those came from beating an incumbent: Alabama (Jim Folsom Jr.), New Mexico (Bruce King), New York (Mario Cuomo) and Texas (Ann Richards). Democrats added six net governorships to their column in 2006, but in so doing they only defeated one Republican incumbent (Bob Ehrlich of Maryland fell to Democrat Martin O’Malley). In 2010 Republicans netted six governorships themselves, but they only beat two Democratic incumbents, Govs. Chet Culver (IA) and Ted Strickland (OH).

In all those years, the incumbents who lost in the general election were uniformly from the party on the wrong side of the wave. If endangered Govs. Tom Corbett (R-PA) or Paul LePage (R-ME) lose this November in an otherwise rosy Republican climate (assuming that is the climate), they will be historical curiosities akin to Gilligan. This encourages us to watch them all the more carefully; weak incumbents can surprise observers and win reelection if the national breaks are going their party’s way.

While it’s possible that 2014 will be a wave year, it’s also possible that it will feature a milder climate. In recent history, those have been years where there have been some harder-to-categorize, Gilligan-like gubernatorial outcomes. For instance, 1998 was a relatively stable election year: There was no net change in the Senate, and Democrats netted four House seats. But two incumbent Republican governors lost:  David Beasley of South Carolina and Fob James of Alabama. Their losses can be explained, like Gilligan’s, by local considerations.

Despite a strong Palmetto State economy, Beasley lost in part by picking the wrong enemies: Video gambling machine interests spent heavily to defeat him after he tried to ban the games, and he proposed removing the Confederate flag from the Statehouse. James, meanwhile, had a brutal primary that exhausted his campaign coffers, and he was on the wrong side of a popular issue pushed by then-Lt. Gov. Don Siegelman (D), a lottery to provide college scholarships. Lou Jacobson, an astute observer of statehouse politics and a contributor to Governing magazine, also ascribed poor campaign skills as a partial explanation of James’ defeat. (For more, check out Jacobson’s excellent look at why incumbent governors have lost elections in recent years.) The Democrats who replaced Beasley and James — Jim Hodges (SC) and Siegelman (AL) — ended up losing in 2002, a better Republican year nationally than 1998. (Siegelman, now incarcerated in a controversial case, was also dogged by corruption allegations.)

President George H.W. Bush’s (R) lone midterm, 1990, was also a rather sleepy, waveless year at the national level. Yet six incumbent governors lost in the general election that year, the most in any year since 1966. Perhaps a lack of drama in federal elections that year focused voters’ minds on state politics, and in many cases the voters didn’t like the status quo. The incumbent losers’ list that year was bipartisan: Bob Martinez (R-FL), Mike Hayden (R-KS), James Blanchard (D-MI), Rudy Perpich (D-MN), Kay Orr (R-NE) and Edward DiPrete (R-RI). Observers at the time suggested abortion played a big role in the defeats of the very pro-life Martinez and the very pro-choice Blanchard. Ethical issues plagued DiPrete, who was crushed by almost 50 points and later served jail time for bribery and extortion. Controversy ranging from tax changes to a proposal to store nuclear waste in the Cornhusker State contributed to Orr’s very narrow loss to future Sen. Ben Nelson (D); so too, potentially, did an Election Day snowstorm that might have hurt Republican turnout. Orr was the fourth straight Nebraska Republican gubernatorial incumbent to lose reelection, although later Republican governors Mike Johanns and Dave Heineman easily won second terms.

This is not meant to be an exhaustive list of all recent incumbent gubernatorial defeats. Rather, it’s just to point out that local factors are critical, and can lead to some results that the national political mood, or a state’s federal partisan habits, wouldn’t necessarily suggest.

With that in mind, we have a few ratings changes to make in some races where incumbents might not be quite as secure as their party label would indicate.

Everyone knows the national political leanings of Kansas (deeply Republican) and Massachusetts (deeply Democratic). So it is surprising to check the history and see that over the past 50 years, the Sunflower State has been governed more often by a Democrat (28 of the last 50 years) than the Bay State (just 24 of the last 50 years).

So the idea that Gov. Sam Brownback (R-KS), a former U.S. representative and senator, could be vulnerable might not be quite as strange as it initially sounds.

In some ways, Kansas is a three-party state. Though dominated by Republicans, the state has both moderate and conservative GOP wings, and the centrist Republicans and Democrats will sometimes effectively work together to block the conservative Republicans. One small example: When now-federal Secretary of Health and Human Services Kathleen Sebelius (D) was governor of Kansas last decade, her two lieutenant governors were former Republicans (Sebelius is the aforementioned Gilligan’s daughter). Brownback has governed as a staunch conservative, and he led a primary purge of moderate Republicans in the state Senate, including the Senate president, during the 2012 primary season.

Democrats, and some moderate Republicans, are rallying around House Minority Leader Paul Davis (D) against Brownback, and some limited polling suggests Brownback is at least potentially vulnerable. We’re moving this race to Likely Republican, from Safe Republican.

In Georgia, Gov. Nathan Deal (R) avoided another weather-related catastrophe last week, although he — along with Atlanta Mayor Kasim Reed (D) — struggled mightily during a paralyzing snowstorm in January. Responses to natural disasters or statewide crises can have a markedly positive or negative effect on governors, although Deal might’ve gotten a do-over of sorts with a smooth state handling of the second storm. Perhaps more seriously, Deal has been dogged by ethical questions in office, and there’s a possibility that they could be a liability in the fall. Assuming he defeats a pair of primary opponents, Deal is slated to face state Sen. Jason Carter (D), grandson of former President Jimmy Carter, in the fall.

Democrats are banking on demographic changes in the Peach State to make these races competitive, and Georgia is slowly moving in the Democrats’ direction: As one shrewd local observer told us, Atlanta’s suburbs, politically, are similar to Northern Virginia 15 years ago, and we know how Democratic that region has become. But for this year’s elections, the more important factor for Democratic statewide campaigns here is the quality of the Republican candidates. Carter needs Deal to be in trouble to win, and Michelle Nunn (D), a promising Senate candidate, is banking on a bad Republican nominee to emerge in the open U.S. Senate race.

We’re moving the Georgia gubernatorial contest from Safe Republican to Likely Republican. As in Kansas, an upset would be a big surprise, but this is no longer a sleepy contest.

On the Democratic side, keep an eye on Hawaii, where a surprising poll result showed Gov. Neil Abercrombie (D) trailing former Lt. Gov. Duke Aiona (R). Abercrombie beat Aiona by 17 points in 2010. We’ve gone back and forth on this race over the cycle, weighing Abercrombie’s unpopularity versus the state’s partisan lean: In addition to being heavily Democratic at the federal level, Democrats will have governed the Aloha State for 44 of the 55 years of the state’s existence assuming that Abercrombie serves out the rest of his current term. But Abercrombie, who has irritated enough Democrats to spawn a primary challenge from state Sen. David Ige (D), might kick his office away. We’re moving this race from Likely Democratic to Leans Democratic.

We have previously categorized Illinois, where unpopular Gov. Pat Quinn (D-IL) could be in deep trouble, as a Toss-up. It’s not impossible that President Obama’s birth and adopted states will have Republican governors when he leaves office; Obama’s former Senate seat in the Land of Lincoln already went Republican when Sen. Mark Kirk won it in 2010.

Brownback, Deal or Abercrombie losing would have little to do with national factors, and clearly their state’s generic political lean suggests they will be retained. But gubernatorial races, unlike so many Senate and House races in a partisan era, really can be localized.

Of course, we’d be remiss if we didn’t mention that for all the governors who get themselves into trouble through their own missteps and controversies, there are others who perform well enough so that they coast to reelection even in a state where they should face a tough challenge. Take Gov. Brian Sandoval (R-NV). The Silver State is trending Democratic, but it appears possible that he won’t even have a challenger this year. Chalk that up to Sandoval’s political acumen and moderate governing style. The rating in his race is now Safe Republican, from Likely Republican. 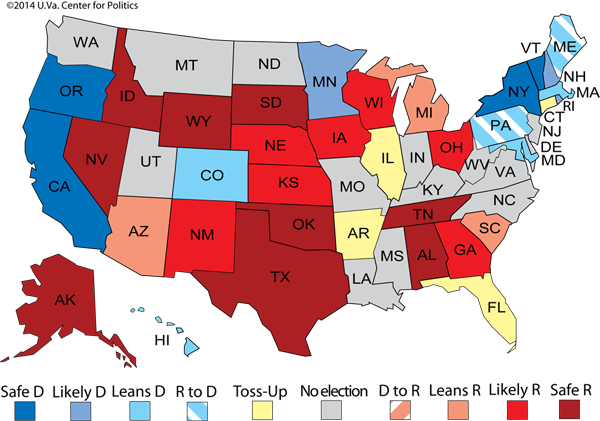