— Following the 2018 election, it appears as though Republicans will only hold three districts won by Hillary Clinton in 2016, while Democrats are on track to hold 31 districts won by Donald Trump in 2016.

— As Republicans plot a House comeback in 2020, most of their obvious targets are in those Trump-won districts now represented by Democrats, many of whom just got elected.

As of Wednesday afternoon, Democrats appeared likely to hold a 235-200 majority to start the next House, or a net gain of 40 seats, a handful more than it seemed like they had won in the immediate aftermath of the election. A lot of that has to do with the laborious and long vote count in California, where Democrats do better in the votes that are counted later in the process (there’s nothing new or unusual about this, by the way, so please look for conspiracies elsewhere). Earlier this week, engineer T.J. Cox (D) took the lead over Rep. David Valadao (R, CA-21), and as of this point Cox appears to be in the driver’s seat to win.

Assuming Cox wins and nothing else changes, Republicans would need to net 18 seats in 2020 to win back the House.

The GOP holding onto the White House seems to be a prerequisite for realizing such a seat gain, although reelected presidents often don’t provide much in terms of House coattails. Since World War II, six presidents have been reelected to second full terms: Dwight Eisenhower (1956), Richard Nixon (1972), Ronald Reagan (1984), Bill Clinton (1996), George W. Bush (2004), and Barack Obama (2012). Trump hopes to become the seventh. On average, the parties of those six presidents elected to second terms netted only an average of seven House seats in those successful reelection bids. Even in landslides, Nixon (+12) and Reagan (+16) didn’t net quite the number of seats the GOP would need in 2020 to win the House back. To be clear, President Trump has a path to a second term, one that probably would look fairly similar to the one he took in 2016. But the kinds of sweeping national presidential victories Nixon and Reagan achieved don’t seem possible in this current era, let alone with a president whose approval has been both consistent and consistently weak. After deliberately putting a check on the White House in 2018 by voting Democratic for House, some key voters may be hesitant to take that check away even if they otherwise decide to back Trump again for president in 2020.

This is sobering history for Republicans seeking to win the House back in 2020 — but, also, it is just history. It’s also history that omits the big postwar presidential-year House gains enjoyed by Harry Truman (1948, +75 seats) and Lyndon Johnson (1964, +37), who were unelected incumbents whose victories represented their first elected terms. So, it’s not like presidential years featuring incumbents never feature big swings in the House. Additionally, this is a partisan, polarized age featuring less ticket-splitting than in previous decades. Thus, the encouraging thing for Republicans is that there are considerably more districts Trump won in 2016 that are now held by Democrats (31) than they need to net in order to win back the House (18). That gives Republicans a long-enough list of targets, but some of those targets are more compelling than others, and Democrats will be able to play offense in some districts as well.

In winning back the House after eight years of GOP control, Democrats captured almost every Republican-held seat that Hillary Clinton carried in the 2016 presidential election. There were 25 such districts going into the election, and Republicans successfully defended only three (again, that’s assuming Valadao does eventually end up losing). Meanwhile, Democrats held 13 districts won by Trump in 2016 going into this election; they will now hold 31. Overall, there likely will be just 34 “crossover” districts nationally, down from 38 heading into the election, that voted for different parties for president in 2016 and House in 2018. That’s just 7.8% of the 435 total seats. Generally speaking, there are far fewer crossover districts now than there were a few decades ago. For instance, in the closely contested presidential election of 1976 (decided by just two points nationally), 124 of the 435 House districts (28.5%) voted differently for president and House.

Let’s take a look at both of these kinds of districts, and what they might tell us about the race for the House in 2020. We’ll start with the shorter list: the Clinton-district Republicans.

Table 1: Republicans who will represent districts Hillary Clinton carried in the 2016 presidential election

Sources: 2018 House results are from official statewide sources and the Cook Political Report. 2016 presidential results by congressional district are from Daily Kos Elections.

These three members long appeared to be among the best-positioned swing district Republicans, but even these were close, particularly Rep. Will Hurd’s (R, TX-23) race in what used to be the only truly competitive district in Texas. Democrats will try to mount strong challenges in these districts in 2020 after nominating challengers in each that prompted griping from some Democrats prior to the midterm.

Many of the Clinton-won districts where Democrats beat Republicans in the midterm don’t seem all that likely to swing back in 2020 barring some massive change in perceptions of Trump. Of the 22 Clinton-won seats the Democrats flipped, Trump’s 2016 margin was worse than Mitt Romney’s 2012 margin in 20 of them, indicating an antipathy to Trump that likely hasn’t weakened over his presidency if the Democratic success in these districts is any indication. The only exceptions were PA-7, a seat redrawn prior to the 2018 election where Barack Obama’s seven-point 2012 win fell to just a one-point Clinton 2016 edge but where Rep. Susan Wild (D) won by a solid 10-point margin, and CA-10, another swingy seat that Obama won by 3.6 points and Clinton won by three. Republicans looking to claw back some of these lost Clinton seats might pay particular interest to these two districts, as both should once again be competitive for president.

Speaking of the Golden State, CA-10 was one of Democrats’ seven takeovers there, all in Clinton-won seats — again, assuming Valadao loses. Given the trajectory of the GOP in California — sharply downward, like an anvil falling on Wile E. Coyote’s head — the GOP doesn’t seem likely to immediately re-capture the bulk of them, and they may have trouble winning back any: Republicans haven’t flipped any California seat from blue to red since the 1998 election. Following that election two decades ago, the California House delegation was 28-24 Democratic. Now it appears as though the delegation will be 46-7 Democratic.

Democrats also scored clear or even decisive victories in affluent, highly-educated suburban Clinton-won districts such as CO-6, IL-6, MN-3, KS-3, TX-7, TX-32, and VA-10. These districts, or future versions of them, may be more open to voting Republican after Trump leaves office, but while he’s there, the Democrats probably start this cycle with at least a small advantage in each.

Table 2: Democrats who will represent districts Donald Trump carried in the 2016 presidential election 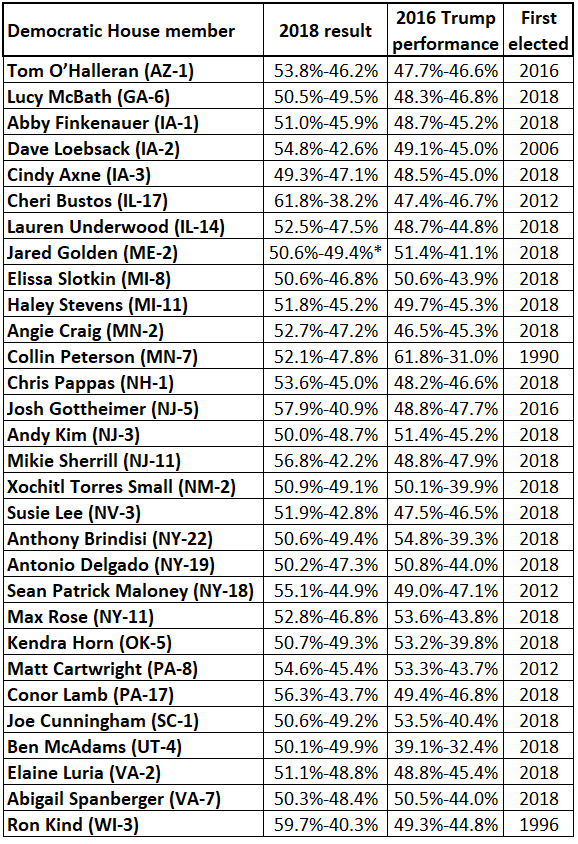 Note: *Results are from after Maine used ranked-choice voting to determine the winner in ME-2. Rep. Bruce Poliquin (R, ME-2) led Golden (D) 46.3%-45.6%, but the failure of either candidate to win a majority activated the state’s new ranked-choice voting method, which allowed Golden to win. Results for most races are not completely final, so they could change slightly in some cases.

Sources: 2018 House results are from official statewide sources and the Cook Political Report. 2016 presidential results by congressional district are from Daily Kos Elections.

If Republicans win the House back, one would expect that a very substantial portion of their gains would come from this list.

The most vulnerable Democrats come from the five districts where newly-elected Democrats won very narrowly — by less than two points — in 2018 and where Trump won by double-digits in 2016: Reps.-elect Jared Golden (D, ME-2), Xochitl Torres Small (D, NM-2), Anthony Brindisi (D, NY-22), Kendra Horn (D, OK-5), and Joe Cunningham (D, SC-1). Rep.-elect Ben McAdams (D, UT-4), who had to wait until after Thanksgiving to officially win his race over Rep. Mia Love (R), also merits mention here given that Clinton only won 32% of the vote in his district in 2016, but Trump only got 39%, falling short of a double-digit districtwide victory as he bled a significant share of the GOP vote to Evan McMullin, a protest candidate. Ranked-choice voting in Maine, which elected Golden after he finished slightly behind Rep. Bruce Poliquin (R) on the initial ballot, combined with Maine’s allocation of electoral votes by congressional district (Trump easily won the electoral vote in ME-2 in 2016), adds some additional complications to that race. Republicans will need to make some of these new members one-term wonders to have any hope of retaking the House.

Long-serving Rep. Collin Peterson (D, MN-7) continues to hold, by far, the most Republican seat held by any Democrat: Trump won it by 31 points, about double the 15.5-point margin of the next Trumpiest district on this list, Brindisi’s NY-22. If Peterson retires, the seat will be an easy Republican flip, and the GOP would be wise to heavily target the seat regardless in 2020. National GOP groups basically ignored it in 2016 and 2018 even while underfunded nominee Dave Hughes (R) held Peterson to modest victories each time. Republicans failed in 2018 to significantly push other veteran Democrats in districts that voted for Trump, such as Reps. Dave Loebsack (D, IA-2), Cheri Bustos (D, IL-17), Sean Patrick Maloney (D, NY-18), Matt Cartwright (D, PA-8), and Ron Kind (D, WI-3); can they do significantly better in one or more of these districts in 2020? Quite possibly, especially if Trump is winning reelection and once again carrying these districts. Some of the newly-elected members also occupy somewhat similar kinds of districts, like Reps.-elect Cindy Axne (D, IA-3), Abby Finkenauer (D, IA-1), Elissa Slotkin (D, MI-8), Andy Kim (D, NJ-3), Jeff Van Drew (D, NJ-2), Antonio Delgado (D, NY-19), and Max Rose (D, NY-11). Others noted above, like Reps.-elect Chris Pappas (D, NH-1) and Elaine Luria (D, VA-2), represent perpetual swing areas that could easily break toward the Republicans depending on circumstances in two years.

The 2020 presidential race could reduce the number of “crossover” Democrats on this list not by voting out their Democratic incumbents, but by voting Democratic for both House and president. In other words, some of these Trump-district Democrats might not be in Trump districts in 2020, such as Reps. Tom O’Halleran (D, AZ-1) and Josh Gottheimer (D, NJ-5) as well as Reps.-elect Lucy McBath (D, GA-6), Angie Craig (D, MN-2), Susie Lee (D, NV-3), and Mikie Sherrill (D, NJ-11). All six of these districts came within a point and a half of voting for Clinton in 2016. Other Trump-won districts that nonetheless seem to be trending Democratic were won by Rep. Conor Lamb (D, PA-17) as well as Reps.-elect Lauren Underwood (D, IL-14), Haley Stevens (D, MI-11), and Abigail Spanberger (D, VA-7); of that latter group, Lamb will start the cycle in the strongest position (his district is the least Republican-leaning and his Election Day victory was the most impressive).

Overall, Trump won over 50% of the vote in just 13 of these 31 crossover districts, and over 55% in just one of them. So, while many of these districts clearly lean Republican at the presidential level, they aren’t all districts that are going to vote for Trump again with acclaim.

Then again, there are a handful of Democratic-held districts in states such as Connecticut, Michigan, New Hampshire, Ohio, and Oregon that could either flip from Clinton 2016 to Trump 2020 or see traditional Democratic presidential performance further weaken while still sticking with the eventual Democratic standard bearer. Republicans would be wise to field credible candidates in these places where possible: It may very well be that some typically noncompetitive Democratic-held districts trending toward Trump actually will be smarter targets for Republicans than many of the districts they just lost.

The Democrats’ impressive 2018 showing provided them some extra insulation from a GOP House comeback in 2020, but Republicans have enough targets, at least on paper, to compete for the majority in 2020. Most of those targets, if they materialize, are listed above, but invariably others will emerge (on both sides) as the cycle unfolds.