— Democrats, particularly at the presidential level, are maintaining or increasing their electoral strength in populated areas, but Republicans are strengthening their hold on more rural areas.

— This tradeoff has led to a decline in the number of counties won by Democratic candidates since 2000, especially on the presidential level. So while Democrats continue to win a large number of votes, those votes are being concentrated in a smaller geographic footprint, which can affect the party’s competitiveness for offices where district lines are drawn.

The growing concentration of the Democratic vote

One of the inexorable political trends of recent years has been the declining number of counties won by Democrats. Put simply, Democrats, particularly at the presidential level, are maintaining or increasing their electoral strength in populated areas, whether urban and suburban, as Republicans strengthen their hold on more rural areas.

During the era of President Donald Trump, Republicans have made gains even in those less-populated areas where Democrats once had a chance of winning — from the small towns of Iowa and Wisconsin to the coalfields of eastern Kentucky and West Virginia to the industrial areas of northeastern Ohio.

While Joe Biden won marginally more of the nation’s more than 3,100 counties (and county equivalents) than Hillary Clinton did 4 years earlier, it was still a smaller number than was won by every other Democratic presidential candidate this century (Al Gore in 2000, John Kerry in 2004, and Barack Obama in 2008 and 2012). A note: We used Dave Leip’s Atlas of U.S. Presidential Elections to assemble the tables in this article, and we omitted Alaska, which doesn’t have counties or county-equivalents, as well as Washington, D.C.

In many states, Democratic strength — where it exists at all — is concentrated in a handful of populated counties.

For instance, in the 2020 presidential election, 2 states saw every single county vote for Trump: Oklahoma and West Virginia. Meanwhile, Biden won just 2 of 120 counties in Kentucky, 5 of 92 counties in Indiana, and 3 of 95 counties in Tennessee.

This pattern held even in states that were more favorable to Biden in their topline results. In Michigan, Biden won just 11 of 83 counties. In Minnesota, he won 13 of 87. In Pennsylvania, he won 13 of 67. And in Wisconsin, Biden won 14 of 72 counties. Yet Biden managed to win each of those 4 states, enabling his victory.

In some ways, this should not necessarily be a problem for Democrats. After all, they won the presidency in 2020, while holding the House and moving into a narrow Senate majority. The Democrats were able to do that because most of the populous counties in the U.S. backed Biden, more than compensating for the loss of less-populous counties. According to calculations by demographer William Frey, 67 million more people lived in counties won by Biden than those won by Trump.

Still, bleeding support in lower-population counties is not a great long-term strategy for the party. For starters, it’s an indication that the party’s positions and rhetoric are not being well received throughout the country. And in a more practical sense, the imbalance in population density between Democratic and Republican areas could mean that Republicans will have a leg up as congressional and legislative districts are drawn.

Among governors, Louisiana’s John Bel Edwards won 24 parishes in 2019 — the Bayou State’s county-level equivalent — compared to just 10 for Biden the following year, while Kentucky’s Andy Beshear won 23 counties in 2019, far more than the 2 won by Biden a year later (although that was many fewer than Beshear’s father, Steve, won when winning a second term for governor in 2011).

To gauge how serious the Democratic county declines have been, we took a look at how many counties the Democratic presidential nominee won in the elections of 2000, 2004, 2008, 2012, 2016, and 2020. Determining whether Democrats improved in winning a state’s counties over that period, stayed roughly the same, or declined is more art than science, but we’ve done our best to categorize the 49 states with counties or their equivalents.

One issue to note is that in many states, the number of counties Democrats won ticked upward in 2008, when Barack Obama won, and to a lesser extent in 2012, when Obama was on the ballot the second time, before falling back in 2016 and 2020. By looking at the comparison between 2000 and 2020, we’re effectively setting the “Obama bump” aside, though it’s an interesting question to ponder whether the Democrats will ever be able to harness some of what went into that “bump” in the future to reverse the negative trends outlined here.

Let’s start with the good news for the Democrats: the states that saw either modest or more substantial gains in counties between 2000 and 2020.

The 3 strongest states on our list have all moved toward Democrats since 2000. In Colorado, Gore won 13 of Colorado’s 64 counties in 2000, but Biden won 24. In Virginia, Gore won 31 counties (or independent city equivalents under Virginia’s system) while Biden won 46. And in California, Gore won 20 counties but Biden won 35. 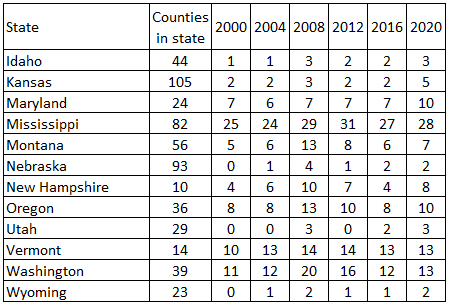 Maryland, Oregon, Vermont, and Washington, all blue states, saw gains in Democratic counties over that period, as did competitive New Hampshire. But perhaps more interesting is that 7 red states have also shown (generally modest) increases in Democratic counties: Idaho, Kansas, Mississippi, Montana, Nebraska, Utah, and Wyoming. Kansas and Nebraska, for instance, have seen Democratic gains in suburban areas (like Johnson County in suburban Kansas City) and Douglas County (which includes Omaha). In Utah, the Democratic victories have come both in urban Salt Lake County and resort areas like Summit County (Park City) and Grand County (Moab).

Table 4: States where the number of Democratic-won counties was largely steady 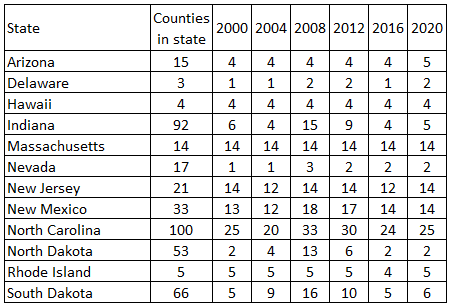 We found 12 states that had a generally steady number of counties won by Democrats between 2000 and 2020. They’re a mix of red (both Dakotas), blue (Hawaii and Massachusetts, where Democrats have carried every county for the past several elections, as well as New Jersey), and purple states (North Carolina and Nevada). One state stands out here as notable: Arizona. Biden won just one more county than the other Democratic nominees since 2000, but that extra county was Maricopa (Phoenix), a mega-county that is the source of about 60% of Arizona’s votes. This was crucial in his narrow statewide victory.

The strongest moves, however, have been in the states that saw declines in the number of Democratic-won counties. 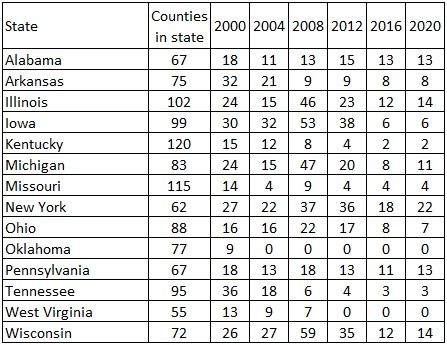 A few of these “declining” states for Democrats are blue states. Two of them — Illinois and New York — have a dominant and strongly Democratic urban center along with an outstate region that has been drifting away from the party.

But at least 9 (possibly more, depending on your definition) are solidly red states, or almost half of the 21 states in the declining category. They include some of the strongest numerical declines in Democratic counties of any state. For instance, between 2000 and 2020, the number of Democratic counties declined from 32 to 8 in Arkansas, 15 to 2 in Kentucky, 36 to 3 in Tennessee, and 13 to 0 in West Virginia.

Perhaps the most worrisome trend for Democrats is the number of purple states in the “declining” category. Not only are such Trump-won states as Florida, Iowa, and Ohio in this category, but so are the Biden-won states of Georgia, Michigan, Minnesota, Pennsylvania, and Wisconsin. That said, the number of counties won can be deceiving: Biden flipped Georgia despite winning fewer counties there than Gore, who lost the state by double digits — such is the power of Democratic growth in the fast-growing metro Atlanta area.

The Georgia trend is somewhat similar to the final state, Texas, which we’ve put in its own category. In Texas, the Obama bump held on through 2016, before declining in 2020 — even though Biden came much closer to winning the state than Obama ever did.

This is a microcosm of the Democratic trend nationally: gains in populous counties, losses in smaller-population counties. In Texas, it was enough to enable Democrats to narrow the Republicans’ presidential margin of victory in the state from almost 9 points in 2016 to about 5.5 points in 2020. Will the tradeoff between big and small counties be enough for Democrats to win elections nationally over the longer term? Only time will tell.