— The number of swing voters — those who change their minds between presidential elections — has been declining over time.

— However, there are still some swing voters, and they can be decisive in the nation’s highly competitive presidential elections.

— Swing voters helped Joe Biden win the White House, and perceptions of Donald Trump’s stronger conservative ideology in 2020 compared to 2016 may have pushed some swing voters away from the incumbent and toward the challenger.

The vital importance of a dwindling pool of swing voters

Swing voters were once the most sought-after prize in American elections. A key goal of most political campaigns was to win over voters who lacked strong ties to either major party and were therefore open to supporting either side. Data from surveys conducted by the American National Election Studies show that there were once vast numbers of such swing voters and that their votes often determined the winners of presidential elections. 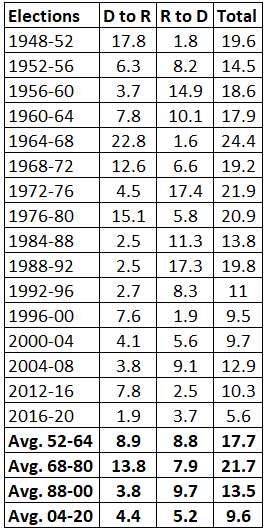 Between 1952 and 2020, the ANES asked a national sample of American voters to indicate which party they supported in the presidential election and, in every year except 1984 and 2012, which party they had supported in the previous presidential election. The data in Table 1 show that between 1952 and 1992, swing voters made up an average of close to one-fifth of those voting for major party candidates in consecutive elections. Moreover, those swing voters often swung very heavily in one direction. In 1952, for example, 18% of returning major party voters switched from Democrat Harry Truman to Republican Dwight Eisenhower while only 2% switched from Republican Thomas Dewey to Democrat Adlai Stevenson. The result was a landslide victory for Eisenhower. Similarly, in 1976, 17% of returning major party votes switched from Republican Richard Nixon to Democrat Jimmy Carter while less than 5% switched from Democrat George McGovern to Republican Gerald Ford. That was enough to change a Republican landslide into a narrow Democratic victory.

The great American jazz musician Duke Ellington’s famous song says that “it don’t mean a thing if it ain’t got that swing.” Lately, however, American voters just haven’t been swinging the way they used to. The data in Table 1 show that the proportion of swing voters has declined sharply since the 1980s. In the four most recent presidential elections for which data are available, swing voters made up an average of less than 10% of the electorate and, in 2020, they made up less than 6%. That was easily the lowest percentage of swing voters in any presidential election in the modern era.

The dramatic decline in swing voters in presidential elections is part of a broader pattern of change in the behavior of the American electorate since the 1980s — the rise of partisan polarization. Supporters of the two major parties are far more divided on a wide range of issues than they were in the 1970s and 1980s. As a result, partisans increasingly mistrust and dislike both leaders and supporters of the opposing party and are much less willing to cross party lines in elections. This has led to a drastic decline in ticket splitting and growing consistency in election results over time. 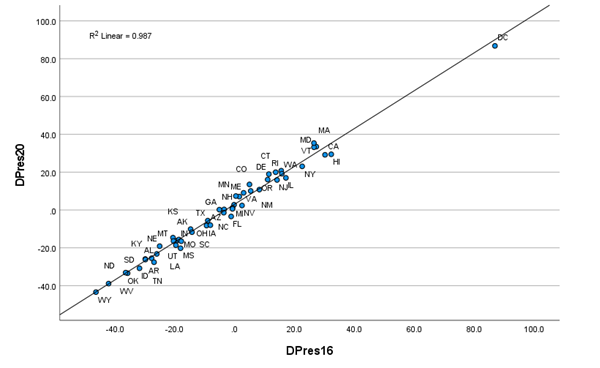 Evidence of this growing consistency can be seen very clearly in Figure 1, which displays a scatterplot of the relationship between the Democratic presidential margin in the 2016 and 2020 presidential elections across all 50 states and the District of Columbia. The data in this scatterplot show that there was an incredibly close relationship between the results of these two elections at the state level. In fact, this was the closest relationship between the results of two consecutive presidential elections since at least the end of World War II. Moreover, the same pattern is evident at the county and congressional district level. The 2020 results were almost identical to the 2016 results with just a small and fairly consistent swing toward Biden.

It is clear that there are far fewer swing voters today than only 20 or 30 years ago. However, swing voters have not disappeared, and they can still play a crucial role in elections. In 2016, for example, although there weren’t many swing voters, there were about three times as many Obama-Trump voters as Romney-Clinton voters. That was probably enough to swing Michigan, Wisconsin, and Pennsylvania to Trump and hand him a victory in the Electoral College.[1]

A closer look at 2020 swing voters

Who are these swing voters? Swing voters differed in several ways from voters who supported the same party’s presidential candidate in both 2016 and 2020. They were somewhat less interested in and attentive to the campaign, so efforts at persuading them would have been challenging. Only 13% of swing voters were strong party identifiers while 29% were pure independents. In contrast, 56% of consistent voters were strong party identifiers while only 5% were pure independents. However, the most important difference between consistent and swing voters in 2020 was their location on a left-right issues scale. This scale measures voters’ combined preferences on a wide range of policy issues including cultural issues, social welfare issues, racial justice issues, gun control, immigration, and climate change. Preferences on these issues were highly correlated with each other and with liberal-conservative identification, indicating that they were all measuring a single underlying left-right dimension.

Figure 2: Distribution of consistent and swing voters on left-right issues scale in 2020 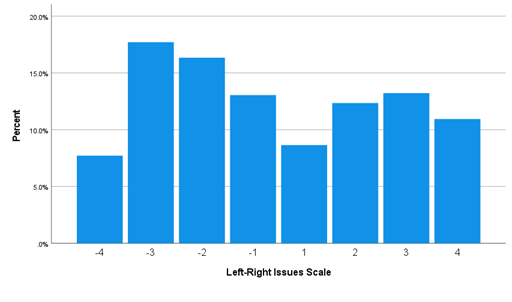 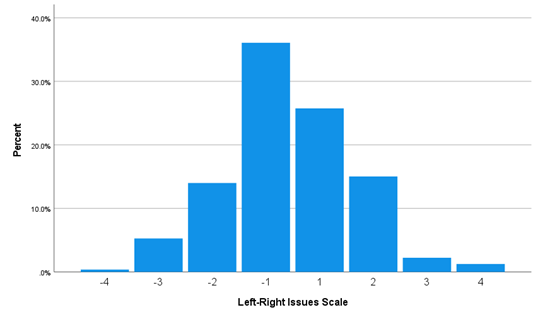 Table 3: Average voter placement of self and candidates on 1-7 liberal-conservative scale in 2016 and 2020

Why did swing voters tilt toward Biden in 2020? One of the keys to understanding voting shifts between 2016 and 2020 appears to be the changing perceptions of the candidates’ ideological positions. Table 3 displays the mean self-placement of voters on the 1-7 liberal-conservative scale and voters mean placements of the Democratic and Republican presidential candidates on the scale in 2016 and 2020. The data in this table show that over this four-year period, there was little change in the mean location of voters — a shift from 4.2 to 4.1 on the 7-point scale. There was a modest shift in the mean placement of the Democratic presidential candidate. Joe Biden was perceived as slightly more moderate than Hillary Clinton with a mean placement of 2.8 vs. 2.6. However, there was a large shift in the perception of Donald Trump’s location — from a mean placement of 5.0 in 2016 to a mean placement of 5.6 in 2020.

Trump was perceived as far more conservative in 2020 than in 2016. In 2016, Trump was viewed as the least conservative Republican presidential candidate since Gerald Ford in 1976. In 2020, however, he was viewed as the most conservative Republican candidate in the history of this question in the ANES survey going back to 1972. This shift was significant in that it placed Trump farther from the average voter than Joe Biden, while in 2016 Trump was considerably closer to the average voter than Hillary Clinton was. 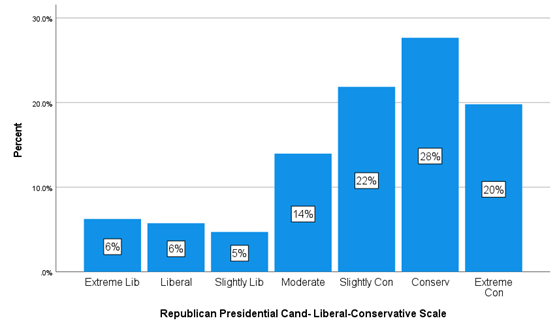 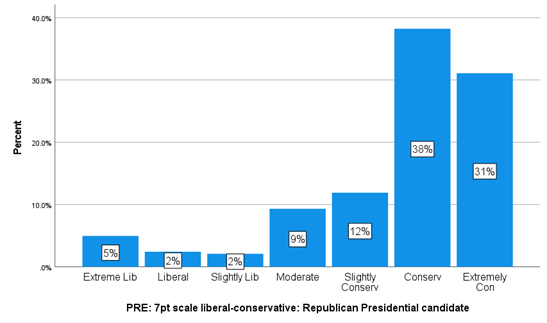 Many political observers have argued that Donald Trump transformed the Republican Party during his four years in the White House. That is clearly true. Trump moved issues that he cared about — especially xenophobia — from the periphery to the center of the party.

What is not recognized nearly as often is that during his four years in office, the Republican Party transformed Donald Trump. The Donald Trump of 2016 lacked a clear ideological identity. While he was generally seen as some sort of conservative, he frequently took positions at odds with conservative orthodoxy including pledging to oppose cuts to Medicare and Social Security and to replace the Affordable Care Act with something providing more generous benefits at lower cost. Even on the issue of abortion, many leaders of the pro-life movement were suspicious of the sincerity of Trump’s recent conversion to their cause. Not surprisingly, given his contradictory positions, the Donald Trump of 2016 was strongly opposed during most of his primary campaign by conservative interest groups and leaders. It was not until he locked up the nomination that Trump received their often reluctant endorsements.

By 2020, everything had changed. Over the course of his presidency, Trump appointed strong conservatives to key positions in the executive branch and the courts and embraced many policies favored by the right wing of the GOP, including aggressively rolling back regulations in areas ranging from labor and women’s rights to energy and the environment. Trump’s signature legislative accomplishment during his four years in office was a conservative dream of a tax law that sharply reduced tax rates on the wealthiest Americans and large corporations. It was no surprise, therefore, that by 2020, Donald Trump’s most reliable supporters were drawn from the right wing of the GOP in the House and Senate or that his last chief of staff was a former member of the far-right House Freedom Caucus.

American voters recognized the transformation of the ideologically ambiguous Trump of 2016 into the strongly conservative Trump of 2020, as the data from the 2020 ANES make clear. Indeed the shift from a mean placement of 5.0 to a mean placement of 5.6 on the 7-point liberal-conservative scale was the largest for any incumbent since the addition of this question to the survey in 1972.

A variety of factors undoubtedly contributed to Donald Trump’s defeat in 2020, including his gross mishandling of the coronavirus pandemic. However, the growing perception of Trump as a far-right president, along with the nomination of the relatively moderate Joe Biden by the Democrats, very likely cost him enough support among swing voters in key states such as Wisconsin, Georgia, and Arizona to shift those states and their crucial electoral votes into the Democratic column.

More generally, the analyses presented in this essay show that while swing voters make up a much smaller share of the electorate today than during the 1970s and 1980s, they can still affect the outcomes of closely contested elections. Given that we are in an era of closely contested presidential elections in which the electoral votes of a few swing states are crucial in determining the winner, presidential candidates cannot afford to ignore swing voters even as they focus more and more attention on mobilizing base voters who make up the bulk of the electorate. Successful presidential candidates in the current era have to thread the needle of appearing moderate enough to appeal to swing voters but progressive or conservative enough to energize their party’s base. That is no easy task.

[1] Unfortunately, the 2016 exit polls did not include a question on 2012 presidential vote.

[2] The 2016 presidential vote question was not included in the Arizona exit poll.