Skip to content
Home
/
Notes on the State of Politics

— Thanks to everyone who reacted to last week’s breakdown of Joe Biden’s vice presidential options. After seeing your comments and following subsequent veepstakes developments over the weekend and earlier this week, it seems clear we did not include at least one prime contender: Atlanta Mayor Keisha Lance Bottoms (D). It is pretty obvious that she is emerging as a prime candidate to be selected, even though she lacks the formal, high-level elected experience that vice presidential nominees almost always possess (she’s never served in Congress or as a state governor). That said, she has earned a much higher profile in the midst of the ongoing national protests over police brutality, and some plugged-in people view her as a top contender for the VP slot. She will almost certainly be included in our next list of contenders, along with former national security adviser Susan Rice (D).

— In our vice presidential breakdown last week, we noted that all but two of the nation’s major party vice presidential candidates have been men and that all of them have been white. However, there’s a possible exception to that latter statement that merits mentioning: Charles Curtis (R), who served as Herbert Hoover’s vice president from 1929-1933, was one-eighth Native American. Prior to becoming vice president, Curtis served as Senate majority leader, and he used to tell audiences that he was “one-eighth Kaw Indian and a one hundred percent Republican.”

— Votes are still being tallied in Georgia, where huge lines provided what we hope is not a grim preview of November. Jon Ossoff (D), best known for narrowly losing a special House election in GA-6 in 2017, inched over the 50% line Wednesday afternoon in later-counted ballots and has apparently secured the right to face Sen. David Perdue (R-GA), based on race projections by Decision Desk HQ and the Associated Press.

— In South Carolina, Sen. Lindsey Graham (R-SC) was renominated with just over two-thirds of the vote against a field of lesser-known challengers. When Graham was last up, in 2014, he won his primary with an underwhelming 56% against a similarly fractured field. As the Crystal Ball noted in a previous edition, Graham has embraced Trump tightly over the past few years, and that seems to have paid dividends with GOP primary voters. As Map 1 shows, Graham lost votes in an interesting place: despite his rightward track, he struggled most with voters in the socially conservative Greenville-Spartanburg area, in Upstate South Carolina. 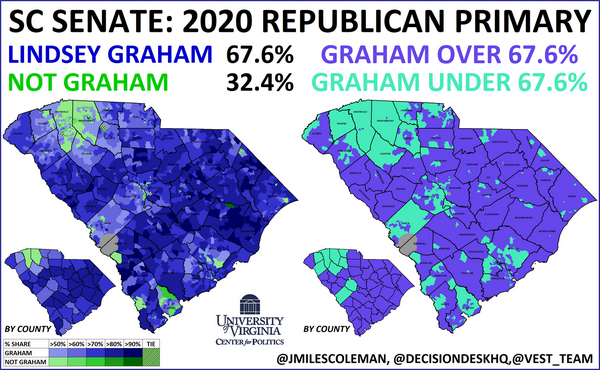 Graham ran somewhat behind his statewide total in the suburbs of Charleston, Columbia, and Charlotte, but not to the extent of Upstate. One reason for this may be that white suburbanites in the larger metros are voting less frequently in Republican primaries. Looking to the fall, Democrats have a well-funded candidate, former state party chairman Jaime Harrison, but it’s a race the Crystal Ball rates as Likely Republican. In the state’s only competitive House seat, the Charleston-centric SC-1, Republicans caught a break when state Rep. Nancy Mace, a candidate backed by House Minority Leader Kevin McCarthy (R, CA-23), won her primary outright with nearly 60%. Mace may have unique local appeal as the first woman to graduate from The Citadel — something that she’s emphasized on the campaign trail. Mace did not make much of an impact, though, as part of a crowded group of primary challengers to Graham back in 2014. Freshman Rep. Joe Cunningham (D, SC-1) was one of 2018’s surprise winners in this blue-trending seat. Still, SC-1 supported Trump by 13% in 2016, so Cunningham will likely need to retain a healthy crossover support in this Toss-up race.

— West Virginia is a curious state in that Democrats still hold a registration edge in the state — although that edge is fast-dwindling — even as the state has become one of the most Republican states in the country at the presidential level. Because there are many conservative Democrats who still vote in Democratic primaries, the protest vote can be interesting to watch. Joe Biden received about 65% of the vote in the West Virginia primary. That’s not a bad showing considering that eight years ago, Barack Obama only got 59% as the sitting president against a challenger who was a federal inmate. On the other hand, the results provided some reminders of how far the Democratic brand in West Virginia has fallen.

In WV-3, the congressional district covering the state’s southern coal country, David Rice (D) — the only one of the 12 Democratic candidates on the presidential ballot who was not a national candidate, meaning that we can interpret votes for him as a pure protest vote — almost finished second behind Bernie Sanders, according to Decision Desk HQ’s vote count. In Mingo County, Biden only got 41% of the vote, while Rice got about 20%; additionally, there was a significant presidential undervote, with about 2,960 votes cast in the Democratic gubernatorial primary to just about 2,220 in the presidential primary. In 1996, Mingo County voted for Bill Clinton by 49 points; by 2016, it was voting for Donald Trump by 69 points. Needless to say, this is probably the last thing we’ll need to say about West Virginia’s presidential voting this year. In the governor’s race, Gov. Jim Justice (R-WV) easily won the GOP nomination (he was first elected as a Democrat in 2016 before switching parties). He’ll face Kanawha County (Charleston) County Commissioner Ben Salango (D) in a gubernatorial race we rate as Likely Republican.