Skip to content
Home
/
Texas: Welcome to the Rodeo

— Texas, a traditionally Republican state that is becoming more competitive, is a vital prize on Super Tuesday.

— While much of the vote has been cast, much remains, and the narrowed field adds further uncertainty to an already-close race.

— The big urban areas may tell the tale.

— Down the ballot, the Democratic Senate field lacks Beto O’Rourke’s sizzle as a runoff looms.

Breaking down the Texas primary

The Texas primary is the day after Texas Independence Day. To the rest of the country, Super Tuesday may be a random amalgamation of delegate-rich states. Yet, let’s be honest, any true Texan would never lump themselves into a group where they have to share the limelight with California.

The Lone Star State appears to be something of a Toss-up between Joe Biden and Bernie Sanders. The total number of registered Texas voters recently surpassed 16 million, and turnout is expected to exceed that of the 2016 Democratic primary turnout (more than 1.4 million votes) and perhaps even approach the 2016 Republican primary turnout — almost 3 million ballots cast. At the end of early voting, about 1 million votes have already been cast on each side of the aisle.

Still, California has nearly double the delegates. Why, then, is Texas important?

Even in a Democratic primary, Texas voters are not ideologically monolithic, and many may lean more towards the center. Texas’ formidable delegate haul might be splintered now that it is a fractured field compounded by Michael Bloomberg’s massive media buys — although the state got less fractured by the exit of several Democratic candidates since South Carolina (but that massive number of early votes means that some voters are probably wishing for a do-over). Texas’ importance is enhanced on Election Night because it may the biggest state that actually gets called Tuesday night. Because of a complicated voter registration and absentee balloting process, California may be hard to call initially, and the vote count will take weeks. The Texas outcome could provide powerful momentum to whomever emerges as the victor going into the rest of the primary calendar.

Bernie Sanders has demonstrated that he is the national front-runner by expanding his original coalition of mostly white younger voters to now include Latinos and other minority groups. However, on Saturday in South Carolina, one of the most important voices in the Democratic base, African Americans, delivered a harsh rebuke to Sanders’ candidacy, 61%-17% according to the exit poll, in favor of Joe Biden. The results of South Carolina only have 72 hours to make their impact on Super Tuesday, yet Biden’s eye-popping 29-point margin — and subsequent endorsements from departed candidates Amy Klobuchar and Pete Buttigieg delivered in Dallas Monday night — could persuade moderate or undecided voters who did not vote early. Former Rep. Beto O’Rourke (D, TX-16), who came close to beating Sen. Ted Cruz (R-TX) in 2018 and later ran for president, also endorsed Biden on Monday.

According to an NBC News/Marist poll, 33% of Texas’ early voters have cast their vote for Sanders, while 25% and 16% have voted for Biden and Bloomberg, respectively. Of Election Day voters, the poll reflects 11% are undecided and 35% back Sanders, while Biden had 16% and Bloomberg had 14%, potentially making it very difficult for Biden to close the gap despite “Joementum” from South Carolina, although more recent polls have been much better for Biden.

Given most polls were conducted before or just during Biden’s excellent series of events in South Carolina, some support may have already melted away from Bloomberg and the departed candidates. In a Public Policy Polling survey asking about the race in Texas without Bloomberg, Biden led the field with 31% to Sanders’ 25%. Since Biden substantially proved his viability in South Carolina, and since Bloomberg’s disastrous initial debate performance was followed by an underwhelming second, Bloomberg’s Election Day voters (and those who backed departed candidates) may flock to Biden as the only realistic alternative to Bernie and his perceived unelectability.

Examining the early vote in Texas, it appeared that early turnout exponentially increased in Houston and Dallas, which some surveys indicate may be good areas for Biden, as well as critical suburban swing counties like Collin, Williamson, Denton, and Fort Bend. However, turnout in Sanders’ core of Travis County (home of liberal Austin and the University of Texas) seemed to increase exponentially on pace with Harris (Houston). 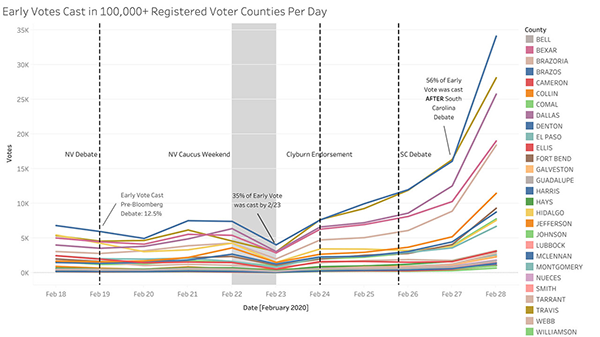 In the most recent polls, Sanders is almost running even with his 33.2% showing in 2016, according to his RealClearPolitics polling average of 29.7%. Given his broadened appeal, Sanders’s 2016 performance in Texas may not be the best indicator for how he may perform today. Unsurprisingly, in 2016 Sanders performed well in Travis and its neighboring suburban Hays County, narrowly winning both counties and thus running way ahead of his statewide showing. Progressive Austin urbanites, along with UT students and faculty, are the target audience for his movement.

Examining post-New Hampshire polls parsed out by Texas metro areas, Sanders could replicate this success in Austin and draw votes from other communities where Clinton dominated in 2016. In Austin, Sanders earns 21% of the vote in the Austin Metro area (YouGov/University of Houston), with his favorability at 71% (PPP). Still, fellow progressive Elizabeth Warren outperforms him in both polls in this stronghold of young liberal voters, at 27% and 80%. After Sanders’ significant loss in South Carolina and Buttigieg and Klobuchar’s exit, Warren could siphon off some millennial votes and suburban voters. (It’s worth noting that these primary polling subgroups have large margins of error, so take this all with a grain of salt.)

More than half (52.7%) of the vote is in Texas’ largest metro areas. Map 1 shows the various concentrations in the state. 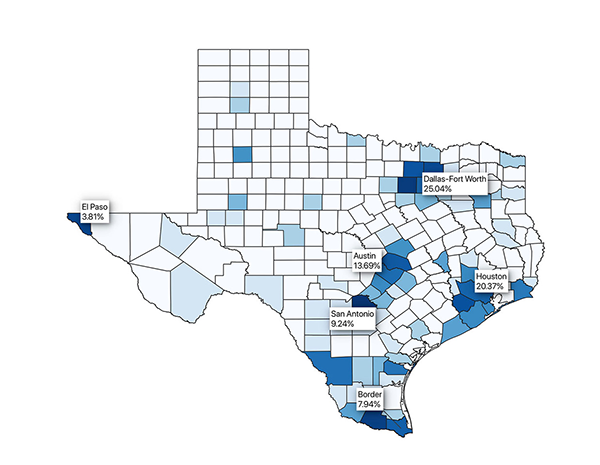 Just like in many other places across the country, Texas’ Democratic Party may be welcoming ancestral Republicans into its primary. These suburban Republicans and independents are moderates who are looking for the best way to beat Donald Trump and reside in districts that flipped in 2018, like Biden endorser Colin Allred’s TX-32. In both Iowa and South Carolina, suburban turnout spiked, swaying the vote towards moderates like Pete Buttigieg and Joe Biden, respectively. The ability to beat Trump — otherwise known as electability — has consistently been the leading decisive factor amongst these Texans with Biden and Bloomberg the favorites.

There are a lot of moving pieces, and even more recent polls cannot account for the changes in the race that we’ve seen in the past few days.

Making Texas even more interesting on Tuesday is that the nation’s second-largest state is also holding its down-ballot primaries. Let’s take a look at those races as well.

Unlike the galvanizing Beto O’Rourke movement in the 2018 campaign, the 12 candidates vying to challenge Sen. John Cornyn (R-TX) have extremely low polling numbers. At this point, there is little interest and energy in the race — a harsh reality that very well may prove fatal to the eventual challenger in November absent a Texas landslide against Trump.

With the Democratic Senatorial Campaign Committee’s backing, M.J. Hegar, who nearly defeated Rep. John Carter (R, TX-31) in 2018, seems like a sure shot at making the May runoff. However, the polling has shown a tight race for second between Dallas-area state Sen. Royce West and labor organizer Cristina Tzintzun Ramirez, with former U.S. Rep. Chris Bell also a possibility to advance. West may consolidate the African-American vote; he shared the endorsement of the Dallas Morning News with African-American Houston Councilwoman Amanda Edwards. In 2006, West helped flip Dallas County blue and currently has the primary’s most congressional endorsements, notably almost all from representatives who have backed Biden.

The more liberal candidates in the race are two Latinas: Ramirez and Sema Hernandez, who lost to O’Rourke in the 2018 primary but won about a quarter of the vote and many counties in heavily Hispanic South Texas. Rep. Alexandria Ocasio-Cortez’s (D, NY-14) endorsement of Ramirez has drawn ire from the Hernandez’s camp, who views their candidate as the true progressive in the race. Given Ramirez’s close ties with both Warren and Sanders, her performance could greatly depend on how each candidate performs in the state. Here, it may be the case that these two progressives split their potential vote share and neither moves onto the inevitable runoff.

An incumbent from each party is facing an ideological challenger that exposes larger divisions in their respective parties.

In Fort Worth-based TX-12, former Fort Worth Mayor Kay Granger was the first Republican woman to represent Texas in the U.S. House, endorsed Mitt Romney in 2007, vehemently opposed Trump in 2016, and identified as pro-choice in the past. Granger is now anti-abortion and has run embracing Trump and his policies.

Granger has drawn an extremely well-funded challenger, Chris Putman, who has run ads attacking Granger’s fealty to and love for the president. A Super PAC created by allies of Sen. Rand Paul (R-KY) has already spent $1.1 million to topple Granger, tarring her as a 12-term establishment insider. In three recent weeks alone, $2.3 million was spent on TV ads, according to the Dallas Morning News.

Along the border in TX-28, there is almost zero polling on an intergenerational matchup between the incumbent conservative Rep. Henry Cueller (D) and liberal 26-year-old Jessica Cisneros, who was recruited by Justice Democrats and backed by EMILY’s List and presidential candidates Elizabeth Warren and Bernie Sanders. No doubt these are valuable endorsements, but in a relatively patriarchal community in South Texas known for its moderates thanks to the highly Catholic Hispanic population of the area, these might not carry much weight and may even hurt Cisneros.

While the constituents of the district may be restless of Cuellar’s conservative positions, this primary begs the question — are voters there ready for a considerably more left-wing alternative? House Speaker Nancy Pelosi, meanwhile, backs Cueller. If I had to bet on one of these districts, I would suspect Granger is likelier to lose her seat than Cuellar.

Of the six seats that the Democratic Congressional Campaign Committee is targeting and the two that they are defending, most of the matchups are set. However, some open primaries have led to uncertainty and large fields that may lead to expensive runoffs. Democrats are targeting Reps. Michael McCaul (R, TX-10), Chip Roy (R, TX-21), John Carter (R, TX-31), and open seats TX-22, TX-23, and TX-24. Of the six seats, TX-23 was the only one carried by Hillary Clinton in 2016, although the others have trended Democratic in recent years and were reasonably close in 2018. Democrats will be defending Reps. Lizzie Fletcher (D, TX-7) and Collin Allred (D, TX-32), who defeated long-serving Republican incumbents in districts that flipped from voting for Mitt Romney in 2012 to Clinton in 2016.

Keep an eye on the Texas House

The Democrats only need nine seats to gain a majority in the Texas House for the first time in 19 years. They have the potential to do this, as they came close in many others that O’Rourke carried in his 2018 Senate bid. This would be pivotal, particularly given Texas’s emergence as a swing state and 2021 redistricting. However, the Democrats also will be playing defense on the 12 seats they picked up in the midterms.

South Carolina established that there may be a long road to the convention. Depending on the trajectory of these primaries, many of these seats — and the biggest prize of 38 electoral votes — may be up for grabs come November. As much as Texans like to think of themselves as divorced from their cowboy roots, the vicious attack ads and ideological warfare in both parties reflect a kind of rough and tumble breeding ground for fresh ideas and potential upsets up and down the ballot.