Skip to content
Home
/
The Post-Labor Day Sprint, Part One: The Senate

— Democrats hope they don’t get a repeat of the 2016 presidential race in the 2020 Senate races. The list of Democratic targets is long, but Republicans still retain an edge in most of the second and third-tier Senate races.

— We provide our latest intel on the most competitive Senate races, and also identify an upset race to watch.

— What would a good night for both parties look like? We sketch it out.

The Senate picture after Labor Day

If things do not break their way in the race for the Senate majority next year, Democrats may find themselves in a situation similar to Hillary Clinton’s presidential campaign four years ago: making inroads in historically unfavorable states — but not actually winning any of those targets — while coming up just short in top-tier races.

Here’s what we mean when we write this: The Clinton campaign made some significant gains four years ago in some states of the Sun Belt. In Arizona and Georgia, the Democrats lost by just 3.5 and 5.1 points, respectively — the smallest deficits for Democrats in the five presidential elections this century in each state. In Texas, Donald Trump’s winning margin (nine points) was just a little better than half that of Mitt Romney’s four years prior (16). However, these improvements netted Clinton no new electoral votes compared to Barack Obama in 2012, and she ended up losing several states that Obama had won in 2012.

Likewise, Democrats in Senate races this year seem poised to strongly compete in places where they have been dormant in recent years. In Kansas, Democrats may run the most competitive Senate challenge since Bob Dole nearly lost in 1974 — although that is less impressive than it sounds, given that every Sunflower State Senate race since then has been decided by at least 10 points or more. Georgia and South Carolina very well could see their most competitive Senate races this century, with the regular Senate election in Georgia perhaps closing to within (or even being closer than) Sen. Saxby Chambliss’ (R-GA) 2.9-point margin in 2008 (that race went to a runoff, which Chambliss won by a much more convincing 15 points). While Democrats often compete for (and win) Montana Senate seats, Gov. Steve Bullock (D-MT) will do significantly better than the party’s outmatched 2014 nominee did against Sen. Steve Daines (R-MT) in what turned into an 18-point race.

And yet, we still favor the Republicans in all of these races.

While the Democrats have a clear path to 50 Senate seats — with the hopes that a Democratic vice president will break ties — we do wonder how real their path is to get beyond 50 seats. And even some of the core races that form the foundation of the clearest Democratic path to the majority remain hotly contested.

In other words, the Democrats still could find themselves winning just moral victories in emerging competitive states, with Republicans maintaining a Senate majority.

Let’s take a tour through the competitive states. We’ll hit on all 18 Senate races — 13 currently held by Republicans, five held by Democrats — that we rate as something other than Safe for the incumbent party. Our observations are based on both publicly available information and chats with sources on both sides of the Senate fight.

In Alabama (Likely Republican), Sen. Doug Jones (D-AL) remains a clear underdog to former Auburn University football coach Tommy Tuberville. The same is true in Colorado (Leans Democratic), where Sen. Cory Gardner (R-CO) trails former Gov. John Hickenlooper (D-CO). There is not much public polling in either race, but our understanding is that the challengers are both leading outside the margin of error in polling.

One commonality between Alabama and Colorado: In both races, one could argue that the trailing incumbents, Jones and Gardner, are running better campaigns than their challengers, Tuberville and Hickenlooper. But the partisan tide in each state is running against the incumbents, which may be the most important thing in this era.

A Fox News poll in Arizona (Leans Democratic) showing former astronaut Mark Kelly (D) leading appointed Sen. Martha McSally (R-AZ) by 17 points does not seem to reflect reality on the ground there as both sides see it, but Kelly likely leads by somewhere in the mid-single digits and is doing slightly better than Joe Biden statewide. If the Republicans are going to claw back Arizona or Colorado, we think this race is the better bet, if only because it’s not hard to imagine Trump winning Arizona and helping McSally over the finish line, whereas it’s almost impossible to imagine Trump winning Colorado.

Partisans appear to have different views of Maine (Toss-up), which is something other analysts have observed over the summer (veteran handicapper Stuart Rothenberg was one) and which we believe is still the case in the wake of Labor Day. Sen. Susan Collins (R-ME) does appear to retain some crossover appeal and may be leading, although the limited public data show state House Speaker Sara Gideon (D) with an edge. This one reminds us a little of the West Virginia Senate race from 2018, when Sen. Joe Manchin (D-WV) held on despite relatively weak favorability numbers. The difference, though, is that Republicans never seemed to think they’d beat Manchin and Democrats were confident in Manchin the whole cycle; this time, some Republicans do seem to think Collins can hang on, while Democrats see the race trending their way even as it remains close.

If we felt better about Joe Biden’s chances of winning North Carolina (Toss-up), we’d be comfortable moving the Tar Heel State’s Senate race in favor of former state Sen. Cal Cunningham (D), who is leading Sen. Thom Tillis (R-NC) by what appears to be the mid-single digits. But Biden’s lead in the state is scant, and it may be that the Republican-leaning voters who currently back Trump but not Tillis come home in the end, which could save Tillis if Trump carries the state again. Operatives debate, just like we do, whether Maine or North Carolina is the state more vulnerable to Democratic takeover.

Iowa (Toss-up) remains close, although some Republicans believe that their side may have gotten a little post-Republican National Convention bump in the Midwest. What is interesting is that the presidential race in Iowa also appears to be as close as the Senate race there. Given that Trump won the state by nine points in 2016, Sen. Joni Ernst (R-IA) may eventually retain an edge against businesswoman Theresa Greenfield (D).

Just like in Maine, partisans appear to take different views of the Montana (Leans Republican) race, meaning that we are having a hard time getting a true handle on it. At the end of the day, this is a Republican state at the presidential level, even though Trump seems likely to significantly underperform his 20-point statewide margin from last time. That may very well be enough for Sen. Steve Daines (R-MT).

In the regular Georgia Senate election (Leans Republican), the best bet seems to be to expect a runoff, which would be held on Tuesday, Jan. 5 — meaning that the winner would be seated a little after the opening of the 117th Congress. If it wasn’t for the fact that the winner needed a majority to win in November, we might call this race between Sen. David Perdue (R-GA) and 2017 GA-6 nominee Jon Ossoff (D) a Toss-up. The race is very close in internal polling. Republicans often have an edge in Georgia runoffs, although if there are two Senate runoffs on the same day — the Georgia Senate special election (Likely Republican) is guaranteed to go to a runoff because all candidates compete together on the same ballot in November — we might expect a bigger turnout than a single race might generate, which might limit whatever turnout advantage Republicans would otherwise expect from recent Georgia history.

The Senate campaign of 2018 nominee John James (R) recently released an internal poll showing James within a point of Sen. Gary Peters (D-MI) in Michigan (Leans Democratic) which, if accurate, is one data point suggesting Republican improvement in the Midwest. However, internal polls that get released often paint a rosy view for their sponsor, and we think Peters is ahead by more based on what we’ve heard and seen. Ultimately, though, if Trump won Michigan, Peters would be endangered. There may be some ticket-splitting in this race — perhaps Peters can perform a little better upstate than Biden, and maybe James can do a bit better in the suburbs than Trump — but the presidential and the Senate races should track closely. The same probably will be true in Minnesota (Likely Democratic), where there has been a little bit of presidential buzz that could bleed down to the Senate race, although Sen. Tina Smith (D-MN) has a significant resource edge over ex-Rep. Jason Lewis (R, MN-2). Meanwhile, James has outraised Peters for the last several quarters and there isn’t much difference between their level of resources. Republicans would love to seriously contest New Hampshire (Likely Democratic) and New Mexico (Likely Democratic), but neither seem like credible GOP targets.

There are several races we continue to rate Likely Republican but that are all competitive to at least some degree: South Carolina, Alaska, Texas, Kansas, and Kentucky. The one we have heard the most about recently is South Carolina, where former state Democratic Party chairman Jaime Harrison (D) is raising gobs of money ($10 million just last month, according to his campaign) and appears to be polling close with Sen. Lindsey Graham (R-SC). We continue to struggle with the ability of Harrison to get the last few points of support he’d need to surpass Graham, although if it can be done, Harrison will have the resources to make it happen. Upsets are hard to predict — they wouldn’t be upsets if they were easy to foresee — but those looking for a surprise on Election Night might keep an eye on South Carolina, where it may be that Graham loses enough Trump voters to a third-party option so that Harrison can win with 47%-48% of the vote. Republicans appear to lead the other races here: Of these, Senate Majority Leader Mitch McConnell (R-KY) is probably the closest to being in the Safe Republican column. GOP leads in Alaska and Kansas appear not to be as big as one might think given the usual orientation of those states: Senate Leadership Fund, the outside GOP group connected to McConnell, just launched a $5 million ad buy in Kansas, which confirms Rep. Roger Marshall’s (R, KS-1) shaky position in the usually GOP state. It may be that we’re giving the Republicans too much of a benefit of the doubt in some of these Likely Republican races.

Map 1 shows our Senate ratings. We continue to show a close overall battle for control, with the most important races (Iowa, Maine, and North Carolina) as Toss-ups. 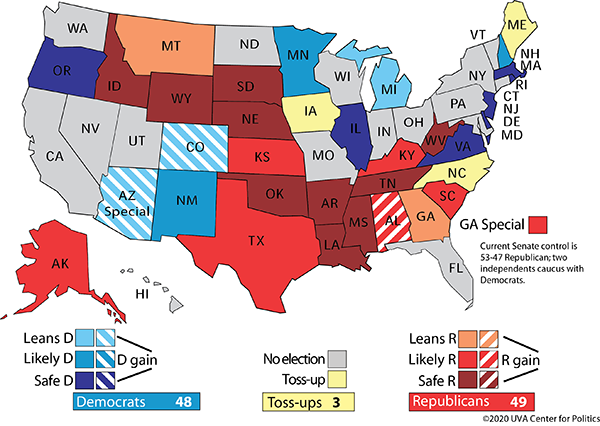 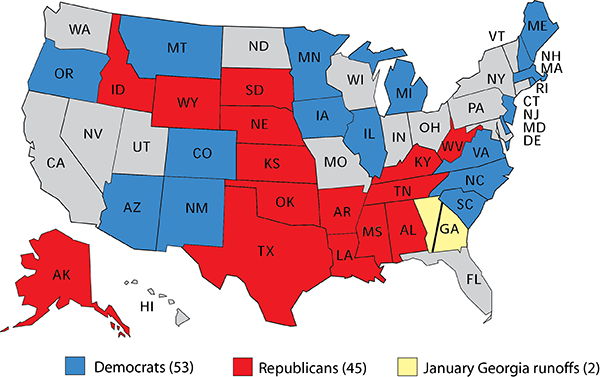 In this scenario, Democrats still lose Alabama, but they win all of the “core four” battlegrounds — Arizona, Colorado, Maine, and North Carolina — as well as two other top targets, Iowa and Montana. Both Georgia races head to runoffs, and Democrats also pick off one of the Likely Republican-rated sleeper races — in this instance, South Carolina. Democrats net six seats, getting to 53 overall, with a chance to add one or two more in the Georgia runoffs after New Year’s Day. 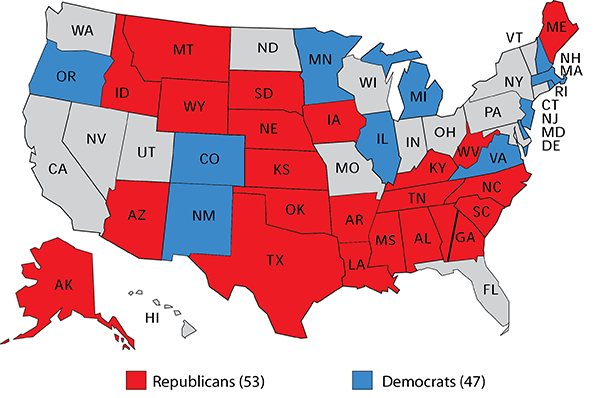 This map represents no net change and a 53-47 Republican Senate. Republicans pick up Alabama and Democrats pick up Colorado, but McSally and Tillis, aided by Trump, hold on in Arizona and North Carolina. Collins survives, and not only does Perdue get over 50%, but appointed Sen. Kelly Loeffler (R-GA) and Rep. Doug Collins (R, GA-9) narrowly take the top two spots in the special election runoff, guaranteeing that the Republicans hold the seat no matter what.

Our own take? We still think a 50-50 Senate is the likeliest outcome, with the vice president of the presidential winner breaking ties.