— Even as Senate elections become more and more about a state’s presidential partisanship, the individual decisions of candidates matter a lot. There are a number of important candidate choices that helped define recent Senate cycles.

— Gov. Chris Sununu’s (R-NH) decision as to whether he will challenge Sen. Maggie Hassan (D-NH) could be the most important candidate choice of the 2022 cycle.

— While Republicans will target vulnerable Democrats in states that are more competitive at the presidential level than New Hampshire, they very well may struggle to produce a candidate in those states as proven as Sununu.

Even as Senate elections become increasingly yoked to a state’s baseline partisanship, the choices by strong candidates to run for office — or not — are vitally important to the overall outcome. These decisions can serve as important mile-markers on the road to national elections as an indicator of which way that talented pols feel the political winds are blowing.

One indicator that Republicans were on their way to winning the Senate in 2014 was when two well-regarded candidates, then-Rep. Cory Gardner (R, CO-4) and former Massachusetts Sen. Scott Brown (R), announced relatively late in the cycle that they would challenge, respectively, then-Sen. Mark Udall (D-CO) and Sen. Jeanne Shaheen (D-NH). Gardner announced his campaign in March 2014, and Brown entered his race in April. Though he would lose in 2020, Gardner narrowly won in 2014, and it seems doubtful that a different Republican would have won that race. Meanwhile, Brown lost by a few points, but he gave Republicans a real candidate in a race that otherwise might not have been as competitive. While Republicans would have won the Senate without Gardner’s win and Brown’s candidacy, the mere fact that these accomplished politicians took the plunge was an indicator of 2014’s strong Republican electoral environment.

More recently, now-Sen. Rick Scott’s (R-FL) decision to run against then-Sen. Bill Nelson (D-FL) in April 2018 was an indicator that another cagey politician saw a path to victory even in what was already shaping up to be a difficult midterm environment for Republicans. Scott outspent Nelson more than two-to-one and won by a tenth of a percentage point. Scott very well may have been the only Republican who would have won that race in that year.

The retirement of Sen. Olympia Snowe (R-ME) in early 2012 turned a sure Republican hold into what immediately seemed would be a likely loss. Sen. Angus King (I-ME), an independent who caucuses with Democrats, ended up easily flipping the seat. While Snowe’s retirement was not decisive — Democrats would win a 55-45 Senate majority that year — it did give the Democrats an offensive target in a year where they were mostly playing defense across the country.

Last cycle, Sen. Johnny Isakson’s (R-GA) decision to resign in the middle of his term for health reasons gave Democrats the extra target they needed to win the narrowest of Senate majorities: Sen. Raphael Warnock (D-GA) won the seat in an early January runoff.

So what’s the most important candidate decision looming over the 2022 Senate elections? Almost certainly that of Gov. Chris Sununu (R-NH), the popular chief executive of the Granite State who is considering whether to run against Sen. Maggie Hassan (D-NH).

If Sununu takes the plunge, Hassan might become — as the Boston Globe’s James Pindell argued back in March — the most vulnerable Democratic Senate incumbent in the nation. If he does not, Hassan might have a relatively easy 2022. There may not be another Senate race in the country this cycle where one potential challenger’s decision would impact the race so much.

Those who believe that presidential partisanship is the be-all and end-all of U.S. Senate races will push back on this argument. Joe Biden won New Hampshire by more than seven points in 2020. The only Republican that holds a Senate seat in a state where Biden did as well is Sen. Susan Collins (R-ME). We suspect that at least some observers will still see Hassan as a favorite even against Sununu for this reason.

But one doesn’t have to go back very far to find a more competitive New Hampshire. In 2016, Hillary Clinton won New Hampshire by only about four-tenths of a point at the same time that Hassan was knocking off then-Sen. Kelly Ayotte (R-NH) by just .14 points. So it’s not like New Hampshire has become a super-solid Democratic state, and it has a longstanding tendency to move with the political tides — tides that often break against the presidential party in a midterm environment.

Still, while Democrats are not defending any seats this cycle in states won by Donald Trump in 2020, they are defending three in states that were significantly closer than New Hampshire: Nevada, which Biden won by a little under 2.5 points, and Arizona and Georgia, which Biden carried by less than a third of a point apiece. Sens. Mark Kelly (D-AZ), Raphael Warnock (D-GA), and Catherine Cortez Masto (D-NV) each won their most recent election by a little more than two points apiece (Cortez Masto won her first term in 2016, and Kelly and Warnock won unexpired terms in special elections last year).

But Republicans do not yet have obvious, top-tier challengers in any of these races.

In Arizona, outgoing Gov. Doug Ducey (R-AZ) has disclaimed any interest in running. Former President Trump has criticized both Ducey and another possible Senate contender, state Attorney General Mark Brnovich (R), for not going along with his delusions about massive fraud in the 2020 election. So both of their potential candidacies “have been doused in cold water by Trump’s disapproval,” National Journal’s Madelaine Pisani wrote earlier this week.

Trump has asked former University of Georgia and NFL star running back Herschel Walker to run against Warnock in Georgia, and Walker may be freezing the field as he decides — another possible candidate, Rep. Buddy Carter (R, GA-1), says he is waiting on Walker’s decision. But it’s also unclear how strong of a candidate the political neophyte Walker might be (he does not even currently live in Georgia). Meanwhile, former Sen. David Perdue (R-GA), former Rep. Doug Collins (R, GA-9), and state Attorney General Chris Carr (R) have all taken a pass on the race.

In Nevada, former state Attorney General Adam Laxalt (R), a very conservative candidate who lost the gubernatorial race in 2018, leads the list of possible challengers to Cortez Masto. Laxalt is capable of beating Cortez Masto, but he has not enjoyed the same level of electoral success as Sununu.

Under the right circumstances, any of these candidates in those other targeted seats could win, and there’s still plenty of time for other candidates to emerge. But none of the likely candidates we’ve mentioned in these other states is as much of an A-lister as Sununu is. If Sununu does run, we would immediately move the New Hampshire Senate race from Leans Democratic to Toss-up. Our current Senate ratings are shown in Map 1. 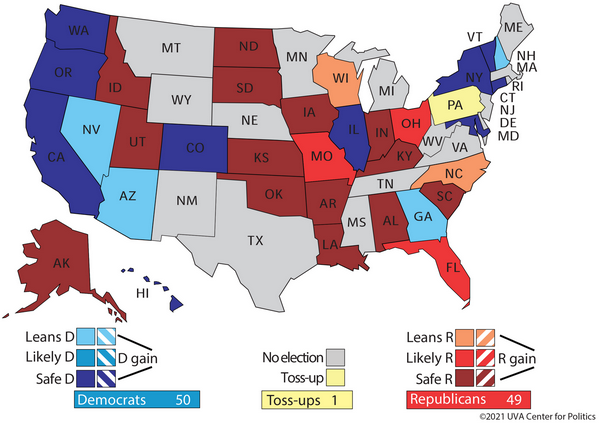 Sununu is a famous last name in New Hampshire: His father served as governor and as White House chief of staff in George H.W. Bush’s administration, and his brother served a term in the Senate, beating then-Gov. Shaheen in 2002 and then losing to her in 2008. After winning a close, open-seat race for governor in 2016, Sununu has won two impressive reelection victories, by seven points in the Democratic year of 2018 and by a massive 32-point margin in 2020 even as Democrats carried the state for president and as Shaheen was winning a third term by 16 points. Republicans performed very well at the state level, as Sununu’s massive reelection victory helped the GOP flip both chambers of the state legislature. But state-level results do not necessarily translate to federal results. Sununu considered challenging Shaheen in 2020, although he probably would not have beaten her given what otherwise transpired in New Hampshire’s federal races. But 2022 could present a better opportunity: Hassan, though she preceded Sununu as governor and has won several statewide races, isn’t as much of a statewide institution as her Senate colleague, Shaheen, and Democrats will have to confront the persistent presidential midterm penalty.

A St. Anselm College poll from early March showed Sununu sporting a 67% approval rating, and he led Hassan in a hypothetical Senate matchup, 47%-41%. Hassan’s approval in the same poll was just 47% approve/44% disapprove. Democrats of course would have plenty of time to federalize the race and reduce Sununu’s crossover appeal, but the upside of Sununu’s candidacy for Republicans is obvious. If Sununu does not run, Republicans may still be able to find a decent candidate. Ayotte, the former senator, appears to want to run for the governorship, which would become an open-seat race if Sununu runs for Senate. However, it’s possible that she could seek a rematch against Hassan if Sununu passes. A February Granite State poll from the University of New Hampshire Survey Center tested both Sununu and Ayotte against Hassan: The Democrat trailed the former by two points but led the latter by five points. It’s just one poll, but it does support the idea that Sununu is the strongest Republican challenger to Hassan.

Sununu seems likelier than not to run, but only he knows what he ultimately will do, and he has plenty of time to decide. Pindell, the long-time New Hampshire political reporter quoted above, described the situation to us thusly: “Sununu IS running for the US Senate right now. He may at some point decide to stop running, but at the moment it is the guiding principle.”

One x-factor in a Sununu vs. Hassan contest could be abortion. Last week, the U.S. Supreme Court agreed to hear a case over a law in Mississippi that would ban abortion after 15 weeks. If the court upholds the law next year, it could give the green light to new abortion restrictions in states governed by Republicans and also give an impetus to Democrats in states they control to codify abortion rights in state law. New Hampshire is one of the more pro-choice states in the Union: A 2014 Pew Research poll found that 66% of Granite Staters believe that abortion should be legal in all or most instances, tied for the fourth-highest mark of any state. But Republicans now control both the governorship and the state legislature. Sununu describes himself as pro-choice, but that position might be put to the test if Roe vs. Wade fell by the wayside (and Democrats have attacked him in past campaigns for positions they say are anti-abortion rights). Indeed, Sununu may face a decision on the abortion issue sooner than that, as the New Hampshire Senate considers a state House-passed bill banning abortion after 24 weeks.

Sununu saying yes to a campaign would suggest 1. That a savvy, purple-state governor sees a clear path to victory and that 2. He actually wants to serve in the Senate, presumably in a majority that he helps make. In that, his situation is similar to Rick Scott’s in 2018, when he ultimately decided to challenge Bill Nelson. Coincidentally, Scott is this cycle’s chairman of the National Republican Senatorial Committee, and he is actively recruiting Sununu to run. “If he runs, we’ll win,” Scott recently told Politico.

If Scott’s prediction came to fruition, we might look back on Sununu’s candidacy announcement as a crucial turning point in the overall battle for the Senate in 2022. While the Republicans have other credible targets this cycle, their path to a Senate majority may run most clearly through New Hampshire — if Sununu becomes a candidate.