— There is not much evidence that President Trump’s rallies held for GOP Senate candidates had much of an effect on the results.

— At the very least, two other factors were significantly more important: The normal partisan lean of the states where those contests took place and the advantage of incumbency.

Did Trump’s campaign stops matter much in the race for the Senate?

“If I didn’t do those stops we would definitely not have control of the Senate. It would be a question, so what are we up, three? Two or three. We would be down five or six or seven. And they know that. Nobody has ever had a greater impact.”

A bright spot for Republicans in an otherwise disastrous 2018 midterm election was their success in maintaining control of the U.S. Senate. In fact, Republicans ended up adding two seats to their Senate majority by picking up seats in Florida, Indiana, Missouri, and North Dakota even while losing seats in Arizona and Nevada.

As the quote at the top of this article indicates, President Trump was quick to claim credit for the GOP’s success in the Senate elections. And, in fact, Trump put a great deal of time and effort into campaigning for Republican Senate candidates, along with a few gubernatorial and House candidates, during the final weeks of the campaign. According to data compiled by Wikipedia, the president held 35 rallies with Republican Senate candidates during 2018, including 23 during the months of October and November. During those final weeks, the president campaigned with 15 Republican Senate candidates — he held a single rally in eight states, two rallies in six states and three rallies in Mississippi with GOP candidate Cindy Hyde-Smith, including two on Nov. 26, the day before the runoff election between Hyde-Smith and Democrat Mike Espy.

Perhaps no president in the modern era has put more effort into campaigning for his party’s candidates in the run-up to a midterm election than Donald Trump. But did Trump’s campaigning actually have the sort of positive impact on the results that he claimed?

There are reasons to be skeptical of Trump’s claims about his huge impact on the results of the 2018 Senate elections. For one thing, his statement that Republicans might have lost “five or six or seven” Senate seats without his intervention is obviously overblown. Republicans only had nine Senate seats at stake in 2018, and seven of those were in deep red states. Only two GOP-held seats were in swing states — Arizona and Nevada — and Republicans ended up losing both of those contests.

In order to measure the impact that President Trump’s campaigning had on the 2018 Senate elections, it is necessary to control for two other factors that strongly influenced the results of those contests: the normal partisan lean of the states where those contests took place and the advantage of incumbency. These two factors by themselves explain 88% of the variance in the Republican margin across the 34 contests held this year that featured two-party competition (California is not included because two Democrats faced each other in the general election).

In order to estimate the effect of Trump’s campaign rallies, I conducted a multiple regression analysis of the results of all 34 contested Senate contests. The dependent variable in this analysis was the Republican margin in the Senate race. The independent variables or predictors were the Republican margin in the 2016 presidential election in the state, the incumbency status of the race (+1 for a GOP incumbent, 0 for no incumbent, -1 for a Democratic incumbent) and the number of campaign rallies held by President Trump for the GOP Senate candidate during October and November. The results are displayed in Table 1. 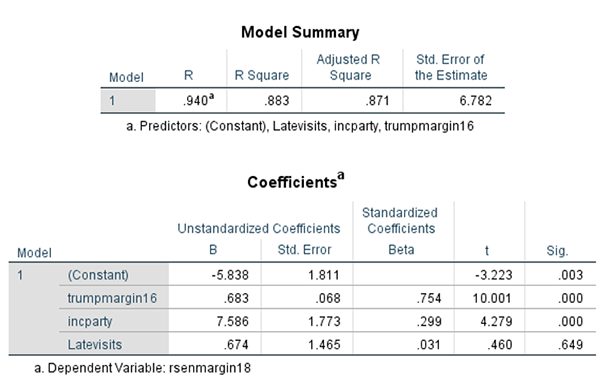 The results in Table 1 show that after controlling for the normal partisan lean of a state and the advantage of incumbency, Trump campaign rallies had a negligible and statistically insignificant impact on the outcomes of these races. Rather, the outcomes of the 2018 Senate contests were overwhelmingly determined by the partisan lean of each state and incumbency. Moreover, an analysis using the total number of Trump rallies during 2018 instead of just rallies during October and November produced almost identical results — in this case, the estimated effect of Trump rallies was slightly negative but statistically insignificant.

In addition to the results of the regression analysis in Table 1, we can examine the outcomes of Senate races in states where President Trump held rallies during the final weeks of the 2018 campaign in relation to the outcomes that would be predicted based on each state’s partisan lean and incumbency by themselves. These comparisons are displayed in Table 2. 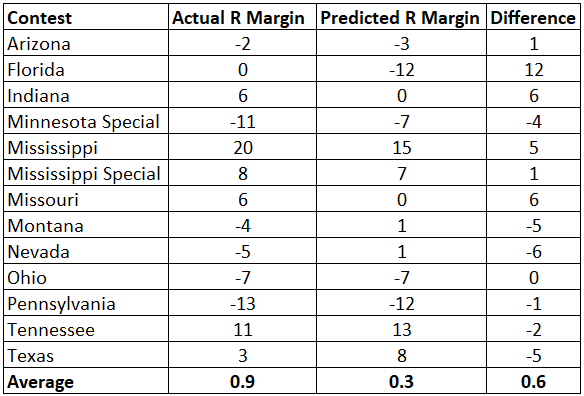 The data in Table 2 show that Republicans did better than predicted in six states where Trump campaigned, worse than expected in six states, and exactly as expected in one. On average, the actual Republican margin in these states was only slightly better than the predicted margin. There was only one state in which the Republican candidate was clearly predicted to lose but won: Florida, where GOP challenger Rick Scott narrowly defeated Democratic incumbent Bill Nelson. But Scott’s victory was probably based more on the fact that he was a reasonably popular outgoing governor with immense financial resources running against an incumbent who was considered a lackluster campaigner than on Trump’s late visit to the state.

The evidence examined in this article suggests that President Trump’s attempts to intervene in the 2018 Senate elections had, at best, mixed results for the GOP. On average, Trump’s campaign rallies appear to have had a minimal impact on the outcomes of Senate contests. A few Republican candidates did better than expected based on “fundamentals” but others did worse than expected. Only one Republican candidate, Rick Scott in Florida, did substantially better than expected but that may well have been due to factors other than the president’s intervention. And while the president’s visits may have marginally helped GOP candidates in red states like Indiana and Missouri, they may have marginally hurt Republicans in swing states like Nevada and Arizona.

The bigger picture here is that Republican candidates actually underperformed in the 2018 Senate elections. Given a map in which Democrats were defending 26 seats, including 10 in states carried by Donald Trump in 2016, Republicans might well have picked up six or seven seats in 2018 in a neutral political environment. But the political environment in 2018 was far from neutral, as can be seen in the results of the House and gubernatorial elections where the map did not give Republicans the same sort of advantage. And the fact that the overall political environment was toxic for Republicans in 2018 was due largely to the unpopularity of President Trump. That reality was far more important than the effects of the president’s campaigning for GOP candidates.