— They may be the only two races we leave in Toss-up when we release our final election picks on Monday.

— The concept of Occam’s Razor — the idea that the simplest explanation is sometimes the likeliest explanation — might be a useful framework to use when assessing the presidential race. 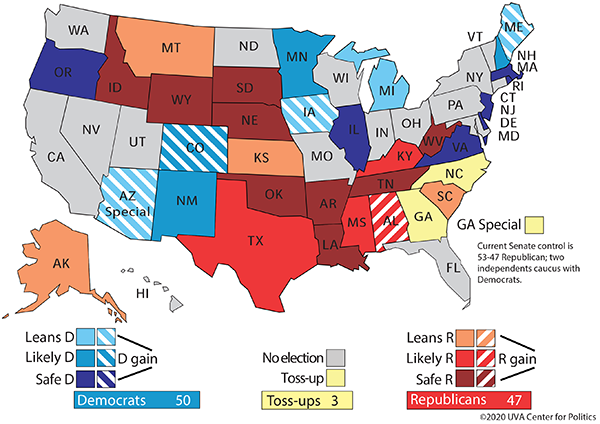 Georgia and the Senate

Per Crystal Ball tradition, we are going to release our final ratings for the 2020 election on Monday. That includes picking all of the Toss-ups.

Well, perhaps not quite all of them.

Today we’re shifting both of Georgia’s Senate elections from Leans Republican to Toss-up.

One of these races, the special election, is virtually guaranteed to go to a runoff because it is an all-party jungle primary with multiple candidates from both parties, so there will in all likelihood be no winner next week. It’s become very clear that Democratic frontrunner Raphael Warnock will finish with the most votes, and there is still a competitive race for what would be the Republican slot in the runoff between Sen. Kelly Loeffler (R-GA) and Rep. Doug Collins (R, GA-9). Warnock has been inching up in polls and consolidating the Democratic vote, but he seems very unlikely to reach 50% given the number of candidates.

So that special election contest will stay a Toss-up at least through the election, when we will reevaluate it.

The regular Georgia Senate race, between Sen. David Perdue (R-GA) and 2017 GA-6 special election nominee Jon Ossoff (D), very well could go to a runoff if neither Perdue nor Ossoff gets over 50%. There is a Libertarian candidate on the ballot, too, which might prevent either from making it across the finish line.

The Perdue-Ossoff race has been very close in polling and has attracted a ton of outside investment. Democratic presidential candidate Joe Biden made a campaign stop in Georgia on Tuesday, a nod both to the close presidential race there but also to the important pair of Senate contests.

We have kept the race as Leans Republican effectively because of our general belief that the runoff could act as a backstop for Perdue: Republicans often have a turnout edge in such races in Georgia. But we really can’t rule out Ossoff winning on Election Day — or winning the runoff depending on the circumstances. The 270toWin polling average has Perdue and Ossoff effectively tied, with Ossoff holding a nominal 47.4%-46.6% edge. At this point, we think it’s likelier that both Perdue and Ossoff finish a little shy of that magic 50% mark, although we may lean the race on Monday if we get a clear indication one way or the other over the weekend that Perdue or Ossoff is likelier to win outright.

The Georgia runoff(s) will take place on Tuesday, Jan. 5.

Our Senate ratings now show 50 Senate seats at least leaning to the Democrats, at least 47 leaning to the Republicans, and three Toss-ups: the North Carolina race between Sen. Thom Tillis (R) and former state Sen. Cal Cunningham (D), as well as the two Georgia contests. A lot of uncertainty remains: Our decision last week to make Sen. Joni Ernst (R-IA) a small underdog in her race raised eyebrows on both sides, and Sens. Martha McSally (R-AZ) and Susan Collins (R-ME) are down but not necessarily out. Meanwhile, Democrats are still fighting to spring an upset in right-of-center states Alaska, Kansas, Montana, South Carolina, and Texas.

Overall, Democrats are favored to win the Senate, but their odds of winning the White House are better.

Democrats remain huge favorites to hold the House and are very likely to net seats, perhaps making double-digit gains. We will lean all of our House Toss-ups on Monday. 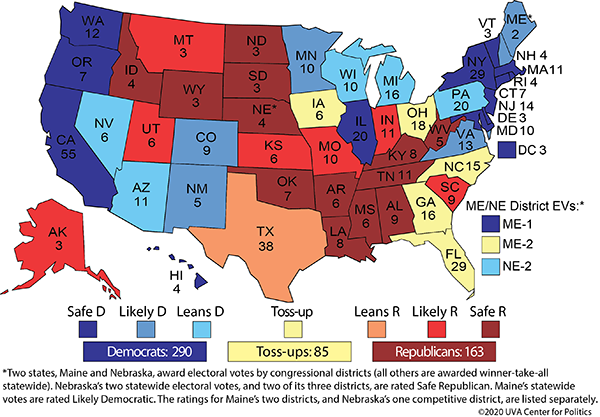 The good news for Trump is that it’s not hard to imagine him winning all the Toss-ups. All of those states (plus the single electoral vote in Maine’s 2nd Congressional District) are very close in polling.

Florida, which many will be relying on as a Rosetta Stone for the national results given what should be a quick vote count on Tuesday night, seems immune to national trends, turning in close elections seemingly every cycle despite wildly different national political conditions. For five straight cycles, from 2010-2018, the state has featured either a gubernatorial race (2010, 2014, and 2018) or presidential race (2012 and 2016) decided by margins no larger than 1.2 percentage points. (Crystal Ball Guest Columnist Lakshya Jain had a great piece in yesterday’s issue about how Florida is so “inelastic” in its voting).

About the only thing we can interpret from the state’s huge early and mail-in vote tallies is that it should be close again. The same is true for those other Toss-ups.

But the difficulty for Trump, and the advantage for Biden, is that the former vice president’s leads in Arizona, Michigan, Nebraska’s 2nd Congressional District, Pennsylvania, and Wisconsin still seem solid, if not always sizeable (as is particularly the case in Arizona). Even if Trump wins all the Toss-ups, he still would need another 22 electoral votes from this group to get to 270 electoral votes. We’ll be looking for late trends in all of these places. One can find surveys showing Trump tied or even a little ahead in these states, but the bulk of the data points to Biden.

A Trump victory next Tuesday would confound analysts once again, and it likely would entail a polling error even more significant than 2016, unless late surveys released over the weekend and early next week pick up on a late Trump trend (as some did in 2016). We also expect to see reports on Election Day of huge Trump support at polling places, which may be 1. A bad omen for Biden or 2. Simply a reflection of more Republicans opting to vote on the day of the election than in advance compared to Democrats. If you’re nervous about the election, on either side, we’d advise you to find something else to do on Tuesday during the day besides following the news. There will be a lot of smoke, but it won’t necessarily be evidence of real fires. (Of course one of the things you should do on Tuesday is vote if you haven’t already.)

There is certainly an organic enthusiasm to Trump’s campaign, given his punishing rally schedule and big crowds — although we do wonder whether the president is undermining himself in some ways by hosting huge rallies in the midst of a current coronavirus spike. That the pandemic remains front and center so close to the election is surely not what the Trump campaign would have wanted, given the public’s generally negative feelings about the president’s handling of the pandemic.

As we assess the election, we keep coming back to this: After the election is over, what outcome would be easier to explain: a Biden victory, or a Trump victory? This is a riff on Occam’s Razor, the concept that in many instances, the simplest explanation for something is the best explanation.

If Trump were to lose, there would be a relatively simple explanation for why that happened.

Trump was elected despite getting fewer votes than his opponent in 2016, and he has rarely if ever demonstrated an ability to expand his support. Trump was reliant in 2016 on late deciders and voters who held an unfavorable view of both candidates, meaning that he had at least some soft support. His opponent this time, Joe Biden, is less polarizing and more popular than his 2016 opponent, Hillary Clinton, and there has been a generally pro-Democratic political environment ever since Trump got elected, as measured by surveys such as the House generic ballot (a good catch-all for the political state of the country) and the November election results in 2017, 2018, and 2019, which generally reflected the reality of a pro-Democratic environment. Trump probably was no better than 50-50 to win reelection prior to the onset of a deadly pandemic that caused damage to the economy, a situation one would not expect to help an incumbent president, particularly one who was already weak.

Trump losing, given these factors, would not be surprising, and would be easy to explain.

Meanwhile, the ingredients that would go into a Trump victory — likely involving massive polling error, essentially all the most competitive states breaking in favor of the trailing candidate, and a huge turnout in favor of a broadly unpopular incumbent president presiding over a difficult time for the country — would be harder to explain. Those ingredients would make some sense in the context of what we saw in 2016, but this environment is harder for the president, even as an incumbent. He was set up better as an outsider against a weaker opponent who was carrying the mantle of a party, the Democrats, trying to win a third straight term in office.

That doesn’t mean Trump can’t win, but when one accounts for all the factors, it would seem harder to explain after the fact than Biden winning.

We’ll release our final picks on Monday. It may be that our minds change by then, and that we can more easily come up with an explanation for why Trump instead of Biden should be favored. But as of now, our ratings continue to lean to Biden.