— The Greater South used to be the key cog in Democratic House majorities; now it is the region that allows Republicans to win majorities.

— Democrats’ dominance on the West Coast and Northeast have allowed them to win majorities even as they have fallen further behind in the Greater South.

— The Republican edge in the Greater South should only grow in 2022.

A brief history of regional strength in the House

One of the likely outcomes of the ongoing redistricting process would be the already-huge Republican edge in a region we’ll call the Greater South growing even larger. If the Republicans capitalize on this opportunity, it will continue what has been perhaps the most important story in House elections since the middle of the 20th century: The South’s transition from a heavily Democratic to a heavily Republican House delegation.

Republicans in North Carolina and Texas drew maps designed to increase their advantage in the House delegations of both of those growing states (we analyzed those maps last week). Republicans in the region’s 2 other most-populous states, Florida and Georgia, likely will as well. Redistricting combined with what for Republicans may be a sunny political environment next year could push the GOP edge in the region to even greater heights.

In my new book, The Long Red Thread: How Democratic Dominance Gave Way to Republican Advantage in U.S. House Elections, I tell the story of House elections from 1964 through 2020. The narrative starts in 1964 because it was the first election after the U.S. Supreme Court’s landmark reapportionment decisions, which applied the principle of “one person, one vote” to U.S. House redistricting, thus mandating population equality among districts in states and setting up our modern redistricting system. 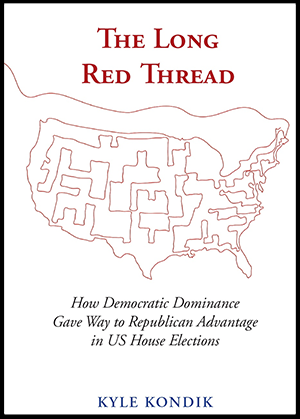 The year 1964 is also significant for other reasons. It came in the midst of a stretch of more than 6 decades of nearly uninterrupted Democratic control of the House from 1931 to the 1994 election. Americans in 1964 elected 295 Democrats to the 435-member House — which remains the largest post-World War II House majority held by either party. But even in the midst of that Democratic success, 1964 was also a year of Republican growth, at least in the South: They netted 4 seats in the region even as Democrats were netting 3 dozen seats overall nationally. The presidential candidacy of conservative Barry Goldwater (R), who opposed federal civil rights legislation, helped Republicans in the conservative South. Still, Democrats retained their historical advantage in the region’s House delegation for another 3 decades, even as Republicans chipped away at it before finally winning the region in their 1994 breakthrough.

Before we go any further, let’s define what the “Greater South” means, as well as the nation’s other regions. Map 1 splits the nation into 5 regions. 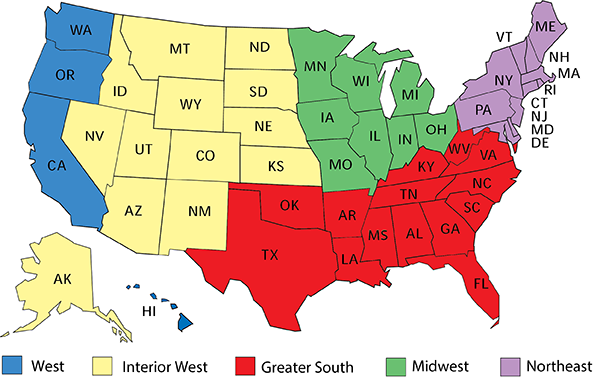 The South is traditionally defined in political science as the 11 states of the Civil War-era Confederate States of America. We add Kentucky, Oklahoma, and West Virginia to the group, states that have some cultural and political similarities to the classically-defined South. The other 4 regions are the Northeast, Midwest, Interior West, and West Coast. We borrowed these 5 regional definitions from David A. Hopkins’ excellent book Red Fighting Blue, which explores the nation’s political divides by geography.

The Greater South had the largest House delegation back in the 1960s, and growth there — led by Florida and Texas — has given it an even larger share of the nation’s House seats now. Table 1 shows each region’s share of House seats from the 1960 census through the 2020 census, upon which this decade’s congressional district maps will be based. 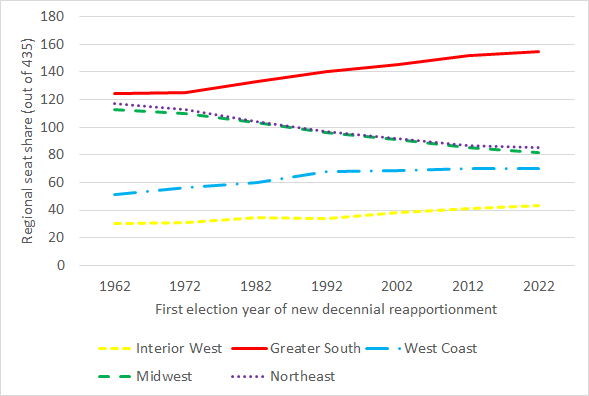 From the 1960 to 2020 census, the Greater South’s share of the seats went from 29% to 36%. The Interior West went from 7% to 10%, while the West Coast went from 12% to 16%. Meanwhile, both the Northeast and Midwest contracted — together they had 53% of all the seats in the 1960s, whereas now they will have just 39% (the regions have had almost the same number of House seats as each other for decades, as illustrated by the nearly-overlapping green and purple lines on the map). 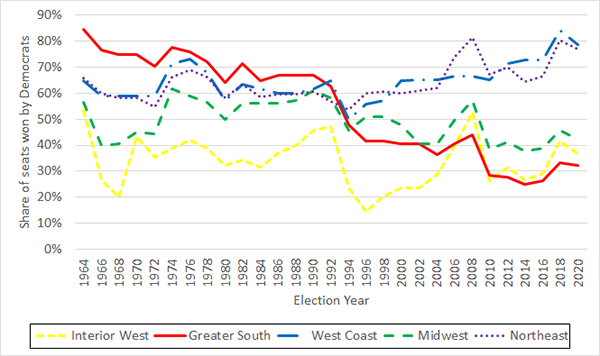 Note the solid red line representing the Greater South: Democrats held 85% of the seats in the region in 1964 but only 32% now — and they were under 30% prior to a rebound in their strong election of 2018. Meanwhile, Democrats have long had edges in the Northeast and West Coast, but those advantages have generally gotten larger in recent years, albeit with a bit of backsliding in 2020. The Republicans almost always hold majorities, and often big majorities, in the growing Interior West, which nonetheless has the fewest seats of any of the regions. The GOP also has often held an edge in the Midwest in recent decades: This century, Democrats have only won a majority of the region’s seats once (2008), although they have come close a few other times. 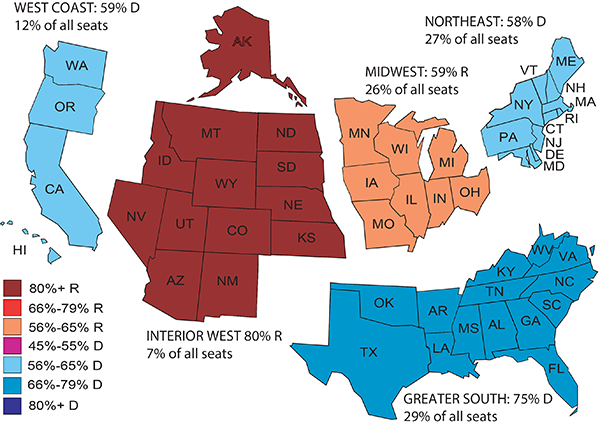 The Democrats’ 1968 majority was reminiscent of modern Democratic majorities in the sense that they had healthy edges on the West Coast and Northeast, although those advantages were not nearly as sharp as they are now. But Democrats owed their overall majority to their still-imposing strength in the Greater South: Even after some erosion in the 1960s, Democrats still held three-quarters of the seats in the region. Republicans dominated the Interior West and had an edge in the Midwest. Overall, Republicans held a 161-150 edge outside the Greater South — but the Democrats’ 93-31 advantage in that region meant they easily held the majority. 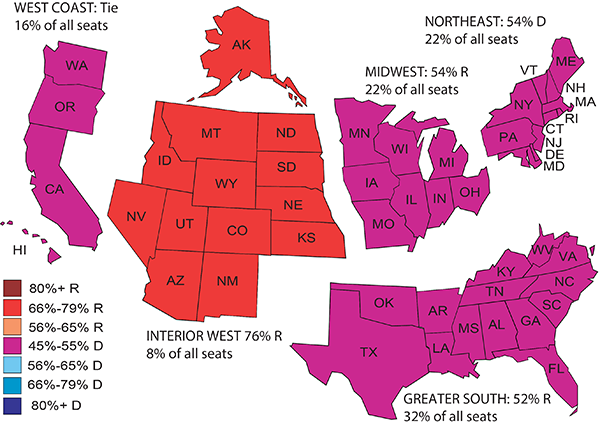 One striking thing about this map is how evenly divided the parties were by region, other than the usual Republican edge in the sparsely-populated Interior West. The West Coast was an exact tie — fueled by Republicans turning an 8-1 Democratic edge in Washington into a 7-2 GOP majority and by Republicans clawing to near-parity in California. Meanwhile, the Democratic advantage in the Northeast was the smallest of the time period covered. 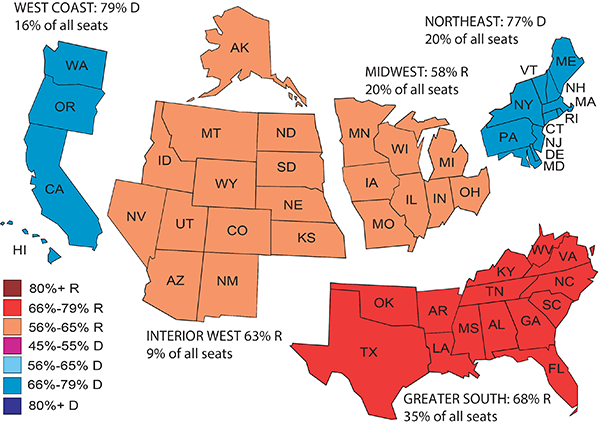 In the quarter century since the Republican breakthrough, the Democrats have built a huge edge in their strongest regions, holding more than three-quarters of all the seats in the Northeast and West Coast combined. But the Republicans have kept pace by squeezing markedly more seats out of the Greater South than they held during the 1990s and maintaining advantages in the Midwest and Interior West. That this Republican growth in the Greater South has coincided with the region adding more seats overall has made the GOP gains there even more important and meaningful.

One can also see how the House results in these regions reflect presidential partisanship. In 2020, Joe Biden won every state in the West Coast and Northeast regions. Donald Trump won all but 2 of the Greater South states (Georgia and Virginia were the exceptions). The Midwest states split 4-4, and while Trump carried a majority of the Interior West states (9 of 13), Biden won the 2 most populous states in the region: Arizona and Colorado, where Democrats have also made inroads in the House in recent years.

As noted above, redistricting, along with the current political environment, should allow Republicans to increase their margins in the growing Greater South. There also will be Republican offensive opportunities in the other 4 regions.

In 2020, Democrats won a 173-110 advantage in the 4 non-Southern regions. But the Republicans’ 103-49 advantage in the Greater South kept them close. The region also will represent by far the most important pillar of the next Republican majority, no matter whether it comes next year or in years to come.