— The latest Crystal Ball Electoral College ratings show how the presidential election could result in a 269-269 deadlock, with neither Joe Biden nor Donald Trump possessing a majority of 270 electoral votes.

— Even though Democrats hold a House majority and remain on track to maintain that majority next year, Republicans actually have and are likely to maintain an edge in a possible Electoral College tiebreaking vote.

— All 50 state-level U.S. House delegations get a single vote to break an Electoral College tie. The Republicans control 26 delegations, the Democrats hold 23, and one state is split (Pennsylvania).

This raises one of the favorite parlor game questions of our quadrennial presidential proceedings: What happens in the event of an Electoral College tie?

The newly-elected U.S House of Representatives would choose the president from among the top three electoral vote-getters. If Biden and Trump were the only two to receive votes, the choice would be between just those two candidates. In the 1824 election, the last time the House voted for president, the House chose among Andrew Jackson, John Quincy Adams, and William Crawford (the sitting treasury secretary). Presidential candidate Henry Clay, the speaker of the House, finished fourth and thus didn’t make the top-three cut. He helped Adams win the House vote, and Adams made Clay secretary of state. The resentment over what Jackson and his supporters called a “corrupt bargain” fueled Jackson’s victory over Adams in 1828.

At first blush, a House tiebreaker would seem to favor Biden and the Democrats, who currently hold a House majority and are likely to keep it even in the event of a presidential vote close enough to produce this hypothetical tied scenario. However, even if they are still in the House minority, Republicans likely would be able to win the tiebreaker vote. That’s because each state House delegation gets a single vote, with majority support — 26 out of 50 — required for the House to elect a president. The Senate elects the vice president, with each member getting a single vote. (The District of Columbia has three electoral votes but no voting representation in the House and the Senate, so it has no vote in this process.)

Presumably, whichever party holds a majority in a state U.S. House delegation would determine how to cast that state’s vote. In some states with single members, such as Vermont and Wyoming, it would be up to that single member which way to vote. Some states might split — for instance, swing state Pennsylvania currently has nine Democratic U.S. House representatives and nine Republicans. It is possible that a tied state would deadlock and not cast a vote.

Still, Republicans currently hold a bare majority of U.S. House delegations, and we continue to favor them to keep that edge.

Map 1 and Table 1 show the current party control of the House delegations. Table 1 also shows how we rate the states in terms of which party is likelier to control the delegation after this year’s election; ratings listed in bold represent a change from the last time we went through the delegations back in January.

Table 2 sums up the ratings. 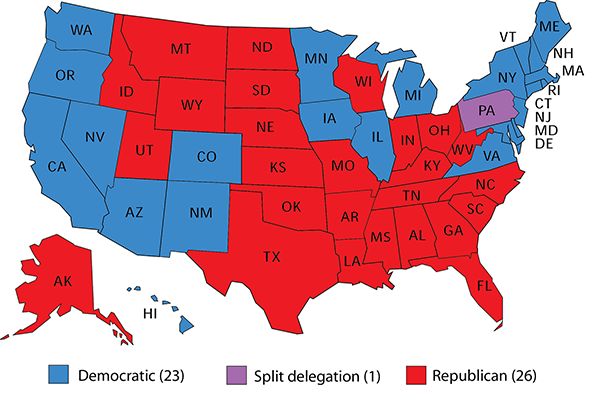 This is mostly unchanged from the start of the year, although there are a few tweaks. We recently moved the single, at-large district in Alaska held by the Dean of the U.S. House, Rep. Don Young (R), from Likely Republican to Leans Republican, which necessitated a rating change here. However, we also moved Florida’s 14-13 Republican delegation from Leans Republican to Likely Republican because, despite the narrow GOP edge, we think the most competitive district in the state is one the Democrats are defending, the Toss-up district held by Rep. Debbie Mucarsel-Powell (D, FL-26). Wisconsin moves to Safe Republican because we rate all five Republican districts in the state as Safe Republican (there was a vacancy in WI-7 back in January), and Maine moves from Toss-up to Leans Democratic in the wake of our decision to move Rep. Jared Golden’s (D, ME-2) district from Toss-up to Leans Democratic a couple of weeks ago. Colorado’s Democratic edge also seems secure, so we moved that 4-3 Democratic delegation to Safe Democratic.

All told, 26 House delegations at least lean to the Republicans, 20 at least lean to the Democrats, and four are Toss-ups: The tied Pennsylvania delegation in which both sides are defending vulnerable seats, as well as Democratic-controlled delegations in Iowa, Minnesota, and Michigan. In the Wolverine State, Democrats continue to hold a nominal 7-6-1 edge following Rep. Justin Amash’s (I, MI-3) decision to leave the GOP in the summer of 2019. Republicans are narrowly favored to hold his seat (Amash is not running for reelection).

One other state to watch is Montana, where Democrats insist that 2018 nominee Kathleen Williams can win the open at-large seat against state Auditor Matt Rosendale (R), who lost a competitive Senate race against Sen. Jon Tester (D-MT) in 2018. We’ve kept the race at Likely Republican, but, like Alaska, this is a race where Republicans could lose control of a state delegation with a single defeat.

That said, in a world in which Republicans are losing a statewide House race in Alaska or Montana or Democrats are otherwise cutting into these GOP-controlled House delegations, is the Electoral College going to be knotted at 269-269? Probably not — in that world, Joe Biden is probably also winning the Electoral College outright.

In other words, if the election is close enough to produce a 269-269 Electoral College tie, Republicans likely will retain their advantage in the tiebreaker vote.