Skip to content
Home
/
The Senate: Iowa to Leans Democratic

— We are moving the Iowa Senate race from Toss-up to Leans Democratic. Iowa remains a Toss-up for president.

— We have a couple of House rating changes, mostly out of an abundance of caution. We also update the House state of play. 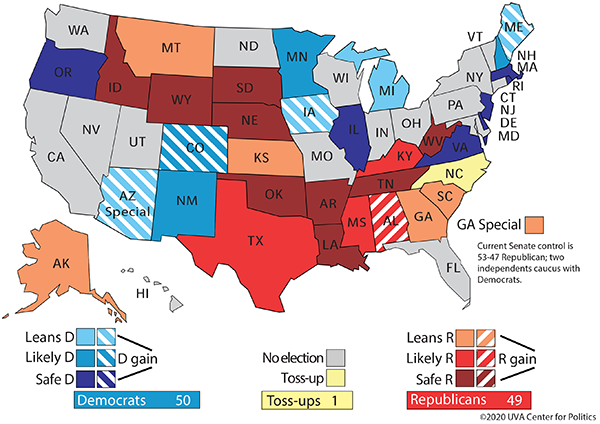 Iowa and the race for the Senate

In Iowa, Sen. Joni Ernst (R-IA) is looking increasingly like an underdog against her Democratic challenger, Theresa Greenfield. At the presidential level, Iowa is looking like a true toss-up, and Greenfield seems to be running at least even with — and often better than — Joe Biden in the state.

For political junkies, perhaps one of the most anti-climactic features of the 2016 election was that, across the 34 states that saw contests, the senatorial results lined up perfectly with the presidential picture. That year, no Donald Trump-won states sent a Democrat to the Senate, or vice versa. But Iowans may be in a more split-ticket mood now — or, they may even deliver the Democrats a sweep in the topline races.

As of Monday, Greenfield’s average lead in the RealClearPolitics average was 4.8%, while Biden was up by a more meager 1.2%. Perhaps tellingly, most of that difference comes from Ernst underperforming Trump — her average polling share stands at 42.5%, compared to Trump’s 46.3%. So it makes sense that, despite his sagging national fortunes, Ernst generally is still trying to frame herself as a firm ally of the president.

For Senate Democrats, last quarter’s fundraising numbers were truly historic. For the period spanning from the start of July to the end of September, Democrats in key Senate contests across the country raised a combined $265 million. In Iowa, Greenfield set a state fundraising record — her $29 million quarterly haul was roughly four times what Ernst raised. Candidate fundraising isn’t everything — outside groups are also spending heavily in the state, and Senate candidates in past cycles have lost to lesser-funded opponents — but going into the final stretch of the campaign, Greenfield seems to have the momentum.

In 2014, Ernst had the luxury of running against a gaffe-prone candidate in then-Rep. Bruce Braley (D, IA-1). Though Braley was initially seen as a strong recruit, he fumbled early in the campaign when he was caught on tape speaking derisively about the state’s other senator, Chuck Grassley, at a fundraiser. If Republicans took the Senate majority that year, Grassley was in line to chair the Judiciary Committee — Braley dismissed the veteran senator as a “farmer from Iowa” who didn’t go to law school. Fairly or not, Braley’s campaign never really recovered from that episode, and 2014 ended up being a disastrously bad year for Democrats across the country.

In last week’s debate, Ernst had something of a Braley-esque gaffe herself. Though her down-to-home image plays prominently into her campaign, she didn’t know the break-even price of soybeans, an important cash crop for the state. Greenfield, by contrast, nailed the price of corn when asked. Senate debates across the country have taken on increasingly national tones, but we’d expect Democrats to use Ernst’s debate answer on such a local issue to cast her as out of touch with the state.

The soybeans gaffe seems symptomatic of Ernst’s reelection effort: in 2014, playing up her rural persona and vowing to “make ‘em squeal,” she rode her motorcycle onto the national scene as a political outsider. After a term in the Senate, and running in a totally different environment, Ernst’s campaign seems to have lost some of that 2014 zeal. Though Iowa hasn’t ousted an incumbent senator since 1984, we see Greenfield with the upper hand. The race is moving from Toss-up to Leans Democratic.

Moving Iowa to the Leans Democratic category before North Carolina wasn’t something we’d have expected for much of this year. In April, the Crystal Ball identified a quartet of Senate races that we identified as the Democrats’ “Core Four” states to flip. Back then, it seemed that Democrats’ most feasible path to a bare 50-seat-plus-VP Senate majority ran through Arizona, Colorado, Maine, and North Carolina — in fact, at the time, we cited Montana as the Democrats’ next best pick-up prospect. We now see Democrats as at least modest favorites in those first three states, while Sen. Steve Daines (R-MT) seems to have a slight edge over his challenger, Gov. Steve Bullock (D-MT), in Big Sky Country.

With today’s update, North Carolina is the only Toss-up race left on our senatorial board. Since news broke of his extramarital activities a few weeks ago, former state Sen. Cal Cunningham (D-NC) continues to lead first-term Sen. Thom Tillis (R-NC). In some surveys that have been conducted since the scandal broke, Cunningham has, perhaps counterintuitively (or maybe completely expectedly?), expanded his lead in some polls — although both his overall share of the vote and his lead over Tillis in polls are a little smaller than before the scandal broke, according to the RealClearPolitics average.

As we discussed recently, amidst all the dizzying news cycles of the Trump era, Cunningham’s affair may seem outright vanilla, and voters may not end up caring. But Republicans are adamant that the affair has, at minimum, hurt Cunningham’s image. Perhaps the key factor is whether the scandal remains in the headlines and what new developments emerge. Over the weekend, the joint editorial boards of the Charlotte Observer and the Raleigh News and Observer issued an unusual dis-dorsement in the race, noting that they would have endorsed Cunningham, but because of the scandal and how he has handled it, they declined to back either candidate. Given the uncertainty there, plus the state’s purple hue, we’re hesitant to write off Tillis.

ABC News reported Monday that the Trump campaign is “increasingly worried” that its chances of winning North Carolina have “all but evaporated” after categorizing the state as “super-safe” just a few weeks ago (both comments are head-scratchers to us). We can’t help but think back to 2016, though, when some of our GOP sources were despondent about the Tar Heel State, and then Trump ended up winning it by a little over 3.5 points. That said, the president arguably is behind in North Carolina, which could have major ramifications for the Senate race.

All in all, the Republicans’ defensive playing field remains large. We are curious to see if Biden makes a late, gigantic advertising play in Texas, a state that Leans Republican in our Electoral College ratings but appears close. That sort of late cash infusion could end up hurting Sen. John Cornyn (R-TX), who, at a Likely Republican rating, we have seen as more secure than many of his Senate colleagues. Texas is already nearing half of its 2016 vote total in early votes cast, although the huge, fast-growing state may blow past its raw vote tally from four years ago.

Today’s change in Iowa puts the Democrats at 50 Senate seats, with the Republicans at 49 and just a single Toss-up, the aforementioned seat in North Carolina. Combined with our Electoral College ratings, which show Biden at least narrowly favored in states and districts containing 290 electoral votes, this change formalizes the Democrats as a small favorite to win the Senate, if only thanks to a potential tie-breaking vote from a Democratic vice president.

A key question we are pondering down the stretch: Do the Democrats flip one or more of the states we currently rate as Leans Republican? If Democrats want to get beyond 51 Senate seats, they will have to, so watch states like Alaska, Georgia, Kansas, Montana, and South Carolina to see whether the Republican floodgates can hold. If any of those states flip, it might involve a state splitting its vote for president and for Senate — giving us something different than we saw in 2016.

We are adding a couple of additional seats to our Likely Republican column: Reps. Doug LaMalfa (R, CA-1) and Brian Mast (R, FL-18). In the former seat, LaMalfa’s 2018 challenger, Audrey Denney (D), more than tripled the incumbent’s fundraising tally in the third quarter. LaMalfa beat Denney by 10 points in 2018. That was a smaller margin than Trump in 2016 and the GOP gubernatorial candidate in 2018, who each carried the district by roughly 20 points apiece. So this is clearly right-of-center territory. Meanwhile, Mast should be OK against Pam Keith (D), and a late September St. Pete Polls finding had him up 50%-42%, similar to his 2016 and 2018 margins of victory. But there are some signs that Trump’s nine-point victory in this district may be smaller than 2016 (the aforementioned poll had the district tied for president). Both of these seats are very much dark horse Democratic targets.

Our overall House assessment remains largely unchanged by the flood of money reported in the third quarter fundraising reports.

Our ratings continue to show 232 seats at least leaning Democratic, 185 at least leaning Republican, and 18 Toss-ups. Were we to pick the Toss-ups today — we’re not, though we will by Election Day — we’d probably predict a roughly two-to-one break in the Toss-ups toward the Democrats. That would give the Democrats a nine-seat gain over the 235 seats they won in 2018.

Given that we are going to pick all the Toss-ups before the election, we try to keep the Toss-up column as short as reasonably possible. But that means there are several shaky seats in both the Leans Republican and Leans Democratic columns.

As we shuffle the ratings in the final couple of weeks, it may be that we end up picking the current underdog in some of these seats. And, of course, we’re not going to pick every seat correctly — we just hope we’re close to the eventual net change in seats.