— The end of Roe vs. Wade could potentially give Democrats a better chance to motivate their own voters and/or persuade Republican-leaning swing voters.

— Public opinion on abortion is nuanced, although more are likelier to take the pro-abortion rights side on a couple of key questions.

— It’s unclear whether abortion opinions would outweigh the public’s opinions about other issues where Democrats are vulnerable.

Abortion and the midterms

The potential demise of Roe vs. Wade could both help Democrats generate higher turnout and appeal better to persuadable, Republican-leaning swing voters in the 2022 election who generally have a concern about women losing access to safe and legal abortion services, according to a new analysis from the University of Virginia Center for Politics/Project Home Fire data analytics project. These findings are based on Project Home Fire’s baseline survey and analysis of the attitudes of roughly 1,000 Joe Biden and 1,000 Donald Trump voters collected prior to Monday’s Politico report about a potential Supreme Court decision that could overrule Roe. (For more information about this project, see some of our past reports linked at the end of this article.)

Project Home Fire asked respondents a couple of questions about abortion rights. The first asked how concerned they were about preventing women from losing access to safe and legal abortion services, and the second was whether they believed abortion should be legal. Responses were given on a 100-point scale, with 0 essentially indicating a maximal anti-abortion rights position (no concern about access to safe and legal abortion services and a belief that abortion should always be illegal) and 100 essentially indicating a maximal pro-abortion rights position (very strong concern about women losing access and that abortion should be legal in all instances).

Tables 1 and 2 show the overall results for these 2 questions. Notice that there are majorities in each instance for at least somewhat supporting the pro-abortion rights question (choosing 51 or above on the scale). 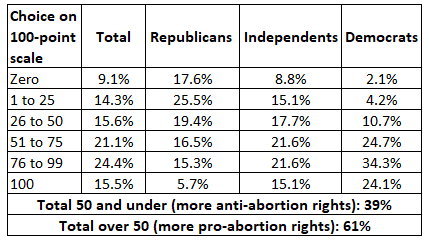 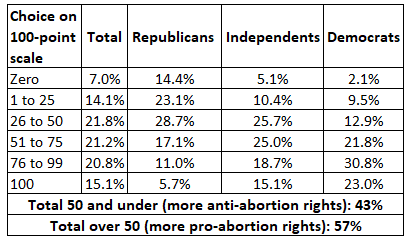 Note, too, that there are a fair number of Republicans, Democrats, and independents who are somewhat in the middle on these questions (those who picked numbers ranging from 26 to 75 for both questions). For instance, note the question about whether a respondent was concerned about women’s access to safe and legal abortion services. Collectively, about 37% of all respondents landed in this category, including roughly equal numbers of Republicans (36%), Democrats (35%), and independents (39%).

These are likely the kinds of people who may be persuadable either way on the topic of abortion. In a forthcoming analysis of voters based on their 2022 voting intentions, we found that “Preventing women from losing access to safe and legal abortion services” emerges as one of the stronger issues for motivating Democratic base and swing voters to get to the polls in 2022 and potentially persuading Republican-leaning voters near the Democratic vs. Republican dividing line to shift their voting intentions to the other side from their present leanings. However, the data also suggest that abortion is more powerful in motivating Democrats than persuading Republican swing voters. Still, these voters present as open to maintaining a woman’s right to choose on abortion and the idea that America should be doing more to ensure this, not less. There are also other salient issues/messages for these voters besides abortion, which we’ll explore more in-depth in that forthcoming piece.

Looking forward, it's very much unclear what will happen with abortion in the 2022 election. For starters, we do not even know if the U.S. Supreme Court’s eventual opinion in Dobbs vs. Jackson Women’s Health Organization will be the same as the one that Politico reported on earlier this week. We also know that, abortion aside, this looks like a Republican-leaning political environment, both based on history and the president’s weak approval ratings.

But our analysis does suggest that 1. The public, broadly speaking, is more supportive of abortion rights and more concerned about women’s access to abortion services than not and 2. There are voters who may be animated by Roe vs. Wade being overturned, which could give Democrats a desperately-needed shot in the arm this November given their many other political problems this year. Whether abortion would trump the concerns that persuadable voters have on other issues — such as inflation and broader economic concerns, where the Democrats appear very vulnerable — remains to be seen, but we may find out if and when the Supreme Court releases their potentially explosive actual opinion on abortion.